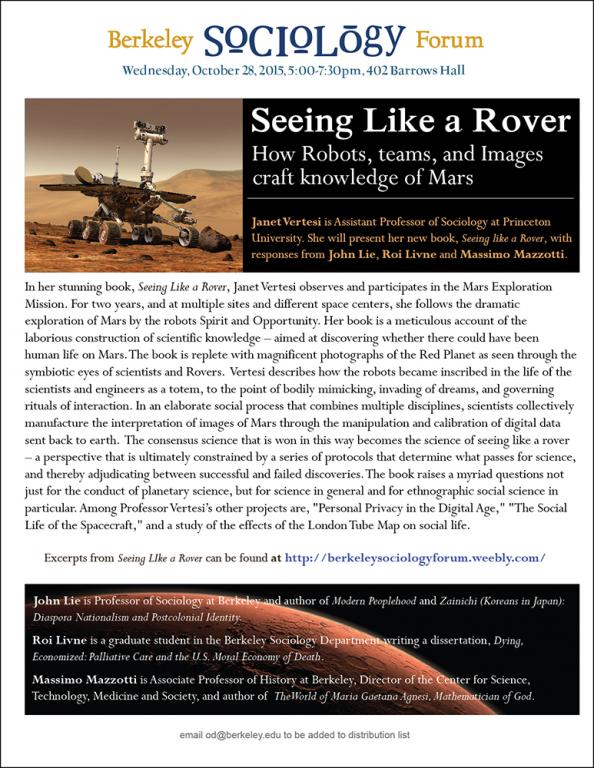 How Robots, teams, and Images Craft knowledge of Mars

Janet Vertesiis Assistant Professor of Sociology at Princeton University. She will present her new book, Seeing like a Rover, with responses from John Lie, Roi Livne and Massimo Mazzotti.

In her stunning book, Seeing Like a Rover, Janet Vertesi observes and participates in the Mars Exploration Mission. For two years, and at multiple sites and different space centers, she follows the dramatic exploration of Mars by the robots Spirit and Opportunity. Her book is a meticulous account of the laborious construction of scientific knowledge – aimed at discovering whether there could have been human life on Mars. The book is replete with magnificent photographs of the Red Planet as seen through the symbiotic eyes of scientists and Rovers.  Vertesi describes how the robots became inscribed in the life of the scientists and engineers as a totem, to the point of bodily mimicking, invading of dreams, and governing rituals of interaction. In an elaborate social process that combines multiple disciplines, scientists collectively manufacture the interpretation of images of Mars through the manipulation and calibration of digital data sent back to earth.  The consensus science that is won in this way becomes the science of seeing like a rover – a perspective that is ultimately constrained by a series of protocols that determine what passes for science, and thereby adjudicating between successful and failed discoveries. The book raises a myriad questions not just for the conduct of planetary science, but for science in general and for ethnographic social science in particular. Among Professor Vertesi’s other projects are, "Personal Privacy in the Digital Age," "The Social Life of the Spacecraft," and a study of the effects of the London Tube Map on social life.

Excerpts from Seeing Like a Rover can be found at http://berkeleysociologyforum.weebly.com/

John Lie is Professor of Sociology at Berkeley and author of Modern Peoplehood and Zainichi (Koreans in Japan): Diasporic Nationalism and Postcolonial Identity

Roi Livne is a graduate student in the Berkeley sociology department writing a dissertation, Dying, Economized: Palliative Care and the U.S. Moral Economy of Death.

Massimo Mazzotti is Associate Professor of History at Berkeley, Director of the Center for Science, Technology, Medicine and Society, and author of The World of Maria Gaetana Agnesi, Mathematician of God.