Aliza Luft. Deciding to Kill or Defecting to Save? Individual, Relational, and Organizational Processes 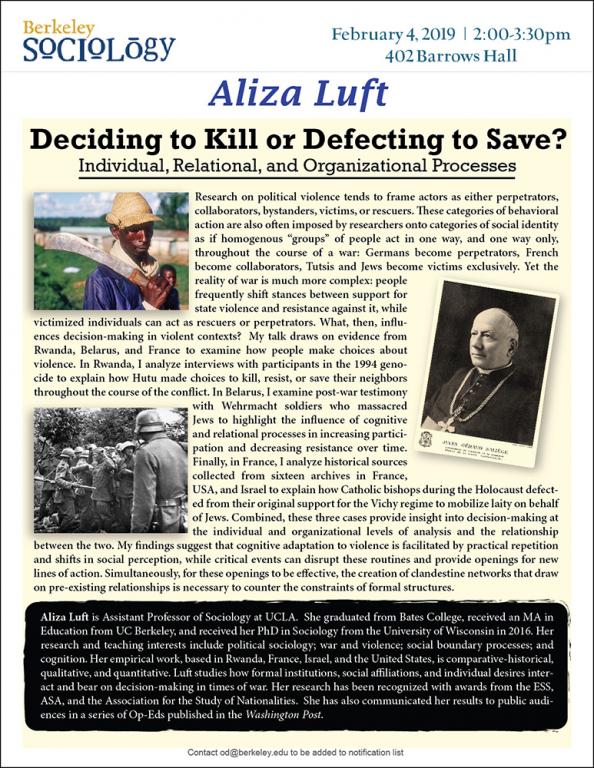 Deciding to Kill or Defecting to Save? Individual, Relational, and Organizational Processes

Research on political violence tends to frame actors as either perpetrators, collaborators, bystanders, victims, or rescuers. These categories of behavioral action are also often imposed by researchers onto categories of social identity as if homogenous “groups” of people act in one way, and one way only, throughout the course of a war: Germans become perpetrators, French become collaborators, Tutsis and Jews become victims exclusively. Yet the reality of war is much more complex: people frequently shift stances between support for state violence and resistance against it, while victimized individuals can act as rescuers or perpetrators. What, then, influences decision-making in violent contexts?  My talk draws on evidence from Rwanda, Belarus, and France to examine how people make choices about violence. In Rwanda, I analyze interviews with participants in the 1994 genocide to explain how Hutu made choices to kill, resist, or save their neighbors throughout the course of the conflict. In Belarus, I examine post-war testimony with Wehrmacht soldiers who massacred Jews to highlight the influence of cognitive and relational processes in increasing participation and decreasing resistance over time. Finally, in France, I analyze historical sources collected from sixteen archives in France, USA, and Israel to explain how Catholic bishops during the Holocaust defected from their original support for the Vichy regime to mobilize laity on behalf of Jews. Combined, these three cases provide insight into decision-making at the individual and organizational levels of analysis and the relationship between the two. My findings suggest that cognitive adaptation to violence is facilitated by practical repetition and shifts in social perception, while critical events can disrupt these routines and provide openings for new lines of action. Simultaneously, for these openings to be effective, the creation of clandestine networks that draw on pre-existing relationships is necessary to counter the constraints of formal structures.

Aliza Luft is Assistant Professor of Sociology at UCLA.  She graduated from Bates College, received an MA in Education from UC Berkeley, and received her PhD in Sociology from the University of Wisconsin in 2016. Her research and teaching interests include political sociology; war and violence; social boundary processes; and cognition. Her empirical work, based in Rwanda, France, Israel, and the United States, is comparative-historical, qualitative, and quantitative. Luft studies how formal institutions, social affiliations, and individual desires interact and bear on decision-making in times of war. Her research has been recognized with awards from the ESS, ASA, and the Association for the Study of Nationalities.  She has also communicated her results to public audiences in a series of Op-Eds published in the Washington Post.