Berkeley Sociology Forum: Arlie Hochschild, "Strangers in Their Own Land: Anger and Mourning on the American Right"" 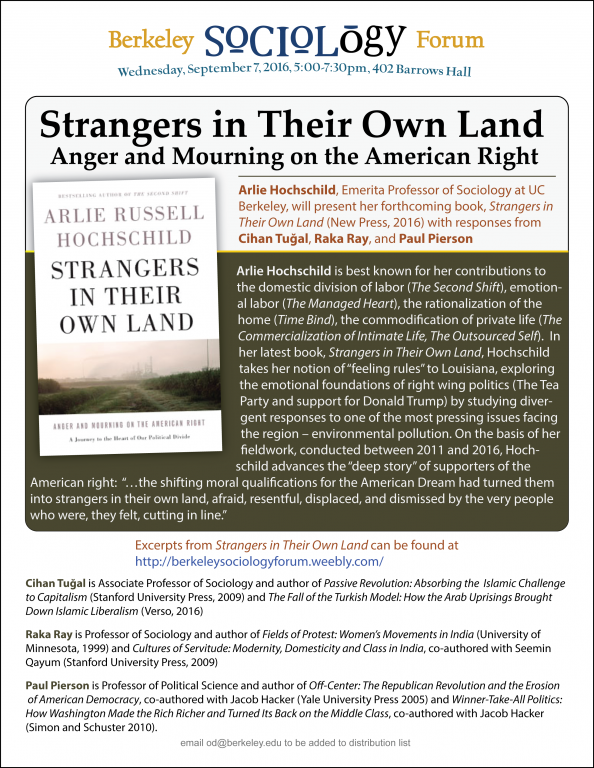 STRANGERS IN THEIR OWN LAND: ANGER AND MOURNING ON THE AMERICAN RIGHT

ARLIE HOCHSCHILD, Emerita Professor of Sociology at UC Berkeley, will present her forthcoming book, Strangers in Their Own Land (New Press, 2016) with responses from Cihan Tuğal, Raka Ray andPaul Pierson

Arlie Hochschild is best known for her contributions to the domestic division of labor (The Second Shift), emotional labor (The Managed Heart), the rationalization of the home (Time Bind), the commodification of private life (The Commercialization of Intimate Life, The Outsourced Self).  In her latest book, Strangers in Their Own Land, Hochschild takes her notion of “feeling rules” to Louisiana, exploring the emotional foundations of right wing politics (The Tea Party and support for Donald Trump) by studying divergent responses to one of the most pressing issues facing the region – environmental pollution. On the basis of her fieldwork, conducted between 2011 and 2016, Hochschild advances the “deep story” of supporters of the American right:  “…the shifting moral qualifications for the American Dream had turned them into strangers in their own land, afraid, resentful, displaced, and dismissed by the very people who were, they felt, cutting in line.”

Excerpts from Strangers in Their Own Land can be found at http://berkeleysociologyforum.weebly.com/

Cihan Tuğal is Associate Professor of Sociology and author of Passive Revolution: Absorbing the Islamic Challenge to Capitalism (Stanford University Press, 2009) and The Fall of the Turkish Model: How the Arab Uprisings Brought Down Islamic Liberalism (Verso, 2016)

Raka Ray is Professor of Sociology and author of Fields of Protest: Women’s Movements in India (University of Minnesota, 1999) and Cultures of Servitude: Modernity, Domesticity and Class in India, co-authored with Seemin Qayum (Stanford University Press, 2009)