Christopher Newfield. The Great Mistake: How We Wrecked Public Universities and How We Can Fix Them. With Kim Voss, Henry Brady, and Prudence Carter 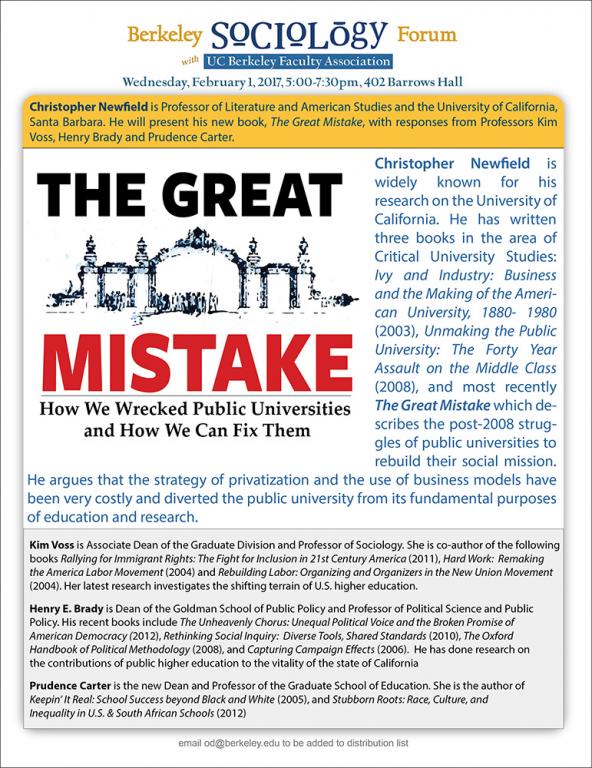 How We Wrecked Public Universities and How We Can Fix Them

Christopher Newfieldis Professor of Literature and American Studies and the University of California, Santa Barbara. He will present his new book, The Great Mistake, with responses from Professors Kim Voss, Henry Brady and Prudence Carter.

Christopher Newfield is widely known for his research on the University of California. He has written three books in the area of Critical University Studies: Ivy and Industry: Business and the Making of the American University, 1880-1980 (2003), Unmaking the Public University: The Forty Year Assault on the Middle Class (2008), and most recently The Great Mistake which describes the post-2008 struggles of public universities to rebuild their social mission. He argues that the strategy of privatization and the use of business models has been very costly and diverted the public university from its fundamental purposes of education and research.

Kim Voss is Associate Dean of the Graduate Division and Professor of Sociology. She is co-author of the following books Rallying for Immigrant Rights: The Fight for Inclusion in 21st Century America (2011), Hard Work: Remaking the America Labor Movement (2004) and Rebuilding Labor: Organizing and Organizers in the New Union Movement (2004). Her latest research investigates the shifting terrain of U.S. higher education.

Henry E. Brady is Dean of the Goldman School of Public Policy and Professor of Political Science and Public Policy. His recent books include The Unheavenly Chorus: Unequal Political Voice and the Broken Promise of American Democracy (2012), Rethinking Social Inquiry:  Diverse Tools, Shared Standards (2010), The Oxford Handbook of Political Methodology (2008), and Capturing Campaign Effects (2006).  He has done research on the contributions of public higher education to the vitality of the state of California

Prudence Carter is the new Dean and Professor of the Graduate School of Education. She is the author of Keepin’ It Real: School Success beyond Black and White (2005), and Stubborn Roots: Race, Culture, and Inequality in U.S. & South African Schools(2012)