Cihan Tugal: "Why Are They so Fearless: Comparative Analysis of Revolts in North Africa, Southern Europe, and Turkey" 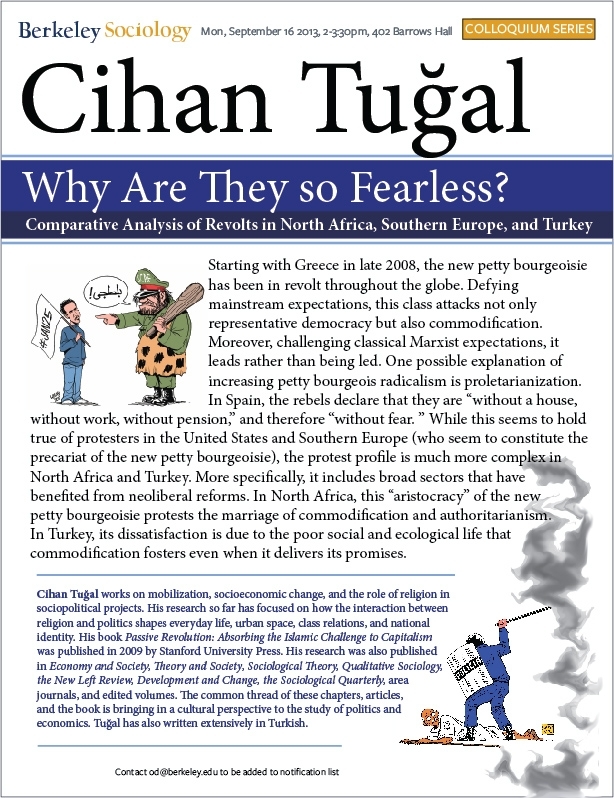 Why Are They so Fearless? Comparative Analysis of Revolts in North Africa, Southern Europe, and Turkey

Starting with Greece in late 2008, the new petty bourgeoisie has been in revolt throughout the globe. Defying mainstream expectations, this class attacks not only representative democracy but also commodification. Moreover, challenging classical Marxist expectations, it leads rather than being led. One possible explanation of increasing petty bourgeois radicalism is proletarianization. In Spain, the rebels declare that they are “without a house, without work, without pension,” and therefore “without fear. ” While this seems to hold true of protesters in the United States and Southern Europe (who seem to constitute the precariat of the new petty bourgeoisie), the protest profile is much more complex in North Africa and Turkey. More specifically, it includes broad sectors that have benefited from neoliberal reforms. In North Africa, this “aristocracy” of the new petty bourgeoisie protests the marriage of commodification and authoritarianism. In Turkey, its dissatisfaction is due to the poor social and ecological life that commodification fosters even when it delivers its promises.

Cihan Tuğal works on mobilization, socioeconomic change, and the role of religion in sociopolitical projects. His research so far has focused on how the interaction between religion and politics shapes everyday life, urban space, class relations, and national identity. His book Passive Revolution: Absorbing the Islamic Challenge to Capitalism was published in 2009 by Stanford University Press. His research was also published in Economy and Society, Theory and Society, Sociological Theory, Qualitative Sociology, the New Left Review, Development and Change, the Sociological Quarterly, area journals, and edited volumes. The common thread of these chapters, articles, and the book is bringing in a cultural perspective to the study of politics and economics. Tuğal has also written extensively in Turkish.