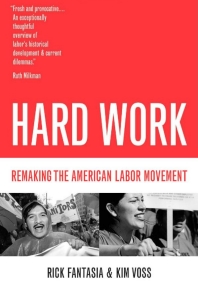 This concise overview of the labor movement in the United States focuses on why American workers have failed to develop the powerful unions that exist in other industrialized countries. Packed with valuable analysis and information, Hard Work explores historical perspectives, examines social and political policies, and brings us inside today's unions, providing an excellent introduction to labor in America.
Hard Work begins with a comparison of the very different conditions that prevail for labor in the United States and in Europe. What emerges is a picture of an American labor movement forced to operate on terrain shaped by powerful corporations, a weak state, and an inhospitable judicial system. What also emerges is a picture of an American worker that has virtually disappeared from the American social imagination. Recently, however, the authors find that a new kind of unionism--one that more closely resembles a social movement--has begun to develop from the shell of the old labor movement. Looking at the cities of Los Angeles and Las Vegas they point to new practices that are being developed by innovative unions to fight corporate domination, practices that may well signal a revival of unionism and the emergence of a new social imagination in the United States.