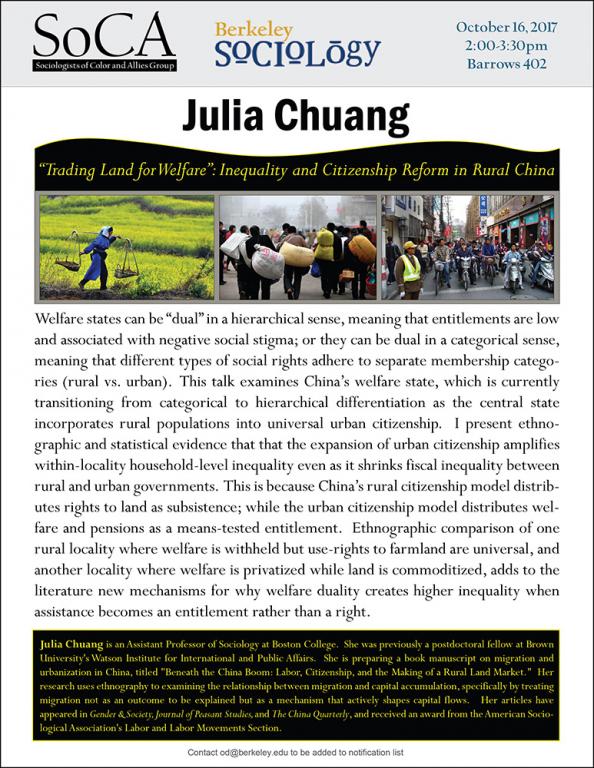 Welfare states can be “dual” in a hierarchical sense, meaning that entitlements are low and associated with negative social stigma; or they can be dual in a categorical sense, meaning that different types of social rights adhere to separate membership categories (rural vs. urban).  This talk examines China’s welfare state, which is currently transitioning from categorical to hierarchical differentiation as the central state incorporates rural populations into universal urban citizenship.  I present ethnographic and statistical evidence that that the expansion of urban citizenship amplifies within-locality household-level inequality even as it shrinks fiscal inequality between rural and urban governments.  This is because China’s rural citizenship model distributes rights to land as subsistence; while the urban citizenship model distributes welfare and pensions as a means-tested entitlement.  Ethnographic comparison of one rural locality where welfare is withheld but use-rights to farmland are universal, and another locality where welfare is privatized while land is commoditized, adds to the literature new mechanisms for why welfare duality creates higher inequality when assistance becomes an entitlement rather than a right.

Julia Chuang is an Assistant Professor of Sociology at Boston College.  She was previously a postdoctoral fellow at Brown University's Watson Institute for International and Public Affairs.  She is preparing a book manuscript on migration and urbanization in China, titled "Beneath the China Boom: Labor, Citizenship, and the Making of a Rural Land Market."  Her research uses ethnography to examining the relationship between migration and capital accumulation, specifically by treating migration not as an outcome to be explained but as a mechanism that actively shapes capital flows.   Her articles have appeared in Gender & Society, Journal of Peasant Studies, andThe China Quarterly, and received an award from the American Sociological Association's Labor and Labor Movements Section.