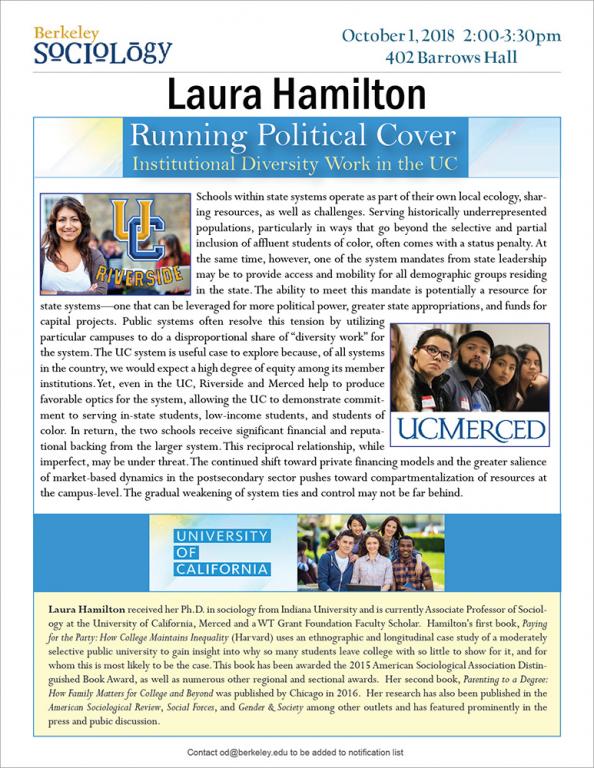 Schools within state systems operate as part of their own local ecology, sharing resources, as well as challenges. Serving historically underrepresented populations, particularly in ways that go beyond the selective and partial inclusion of affluent students of color, often comes with a status penalty. At the same time, however, one of the system mandates from state leadership may be to provide access and mobility for all demographic groups residing in the state. The ability to meet this mandate is potentially a resource for state systems—one that can be leveraged for more political power, greater state appropriations, and funds for capital projects. Public systems often resolve this tension by utilizing particular campuses to do a disproportional share of “diversity work” for the system. The UC system is useful case to explore because, of all systems in the country, we would expect a high degree of equity among its member institutions. Yet, even in the UC, Riverside and Merced help to produce favorable optics for the system, allowing the UC to demonstrate commitment to serving in-state students, low-income students, and students of color. In return, the two schools receive significant financial and reputational backing from the larger system. This reciprocal relationship, while imperfect, may be under threat. The continued shift toward private financing models and the greater salience of market-based dynamics in the postsecondary sector pushes toward compartmentalization of resources at the campus-level. The gradual weakening of system ties and control may not be far behind.

Laura Hamiltonreceived her Ph.D. in sociology from Indiana University and is currently Associate Professor of Sociology at the University of California, Merced and a WT Grant Foundation Faculty Scholar.  Hamilton's first book, Paying for the Party: How College Maintains Inequality (Harvard) uses an ethnographic and longitudinal case study of a moderately selective public university to gain insight into why so many students leave college with so little to show for it, and for whom this is most likely to be the case. This book has been awarded the 2015 American Sociological Association Distinguished Book Award, as well as numerous other regional and sectional awards.  Her second book, Parenting to a Degree: How Family Matters for College and Beyond was published by Chicago in 2016.  Her research has also been published in the American Sociological Review, Social Forces, and Gender & Society among other outlets and has featured prominently in the press and pubic discussion.