Lucie Kalousová. Laboratories of Inequality: The Adoption of Smoke-free Laws and Inequality in Smoking in the United States 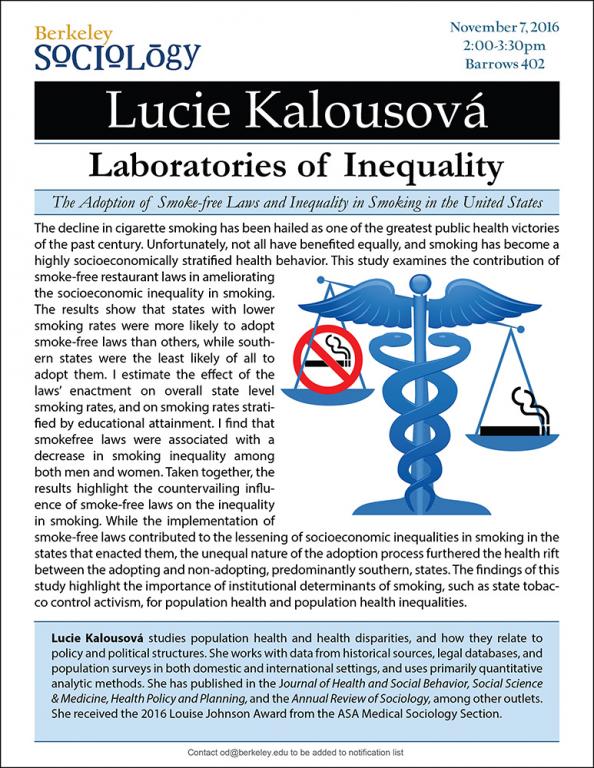 Laboratories of Inequality: The Adoption of Smoke-free Laws and Inequality in Smoking in the United States

The decline in cigarette smoking has been hailed as one of the greatest public health victories of the past century. Unfortunately, not all have benefited equally, and smoking has become a highly socioeconomically stratified health behavior. This study examines the contribution of smoke-free restaurant laws in ameliorating the socioeconomic inequality in smoking. The results show that states with lower smoking rates were more likely to adopt smoke-free laws than others, while southern states were the least likely of all to adopt them. I estimate the effect of the laws’ enactment on overall state level smoking rates, and on smoking rates stratified by educational attainment. I find that smokefree laws were associated with a decrease in smoking inequality among both men and women. Taken together, the results highlight the countervailing influence of smoke-free laws on the inequality in smoking. While the implementation of smoke-free laws contributed to the lessening of socioeconomic inequalities in smoking in the states that enacted them, the unequal nature of the adoption process furthered the health rift between the adopting and non-adopting, predominantly southern, states. The findings of this study highlight the importance of institutional determinants of smoking, such as state tobacco control activism, for population health and population health inequalities.

studies population health and health disparities, and how they relate to policy and political structures. She works with data from historical sources, legal databases, and population surveys in both domestic and international settings, and uses primarily quantitative analytic methods. She has published in the Journal of Health and Social Behavior, Social Science & Medicine, Health Policy and Planning, and the Annual Review of Sociology, among other outlets. She received the 2016 Louise Johnson Award from the ASA Medical Sociology Section.