Michèle Lamont. Getting Respect: Responding to Stigma and Discrimination in the United States, Brazil, and Israel. 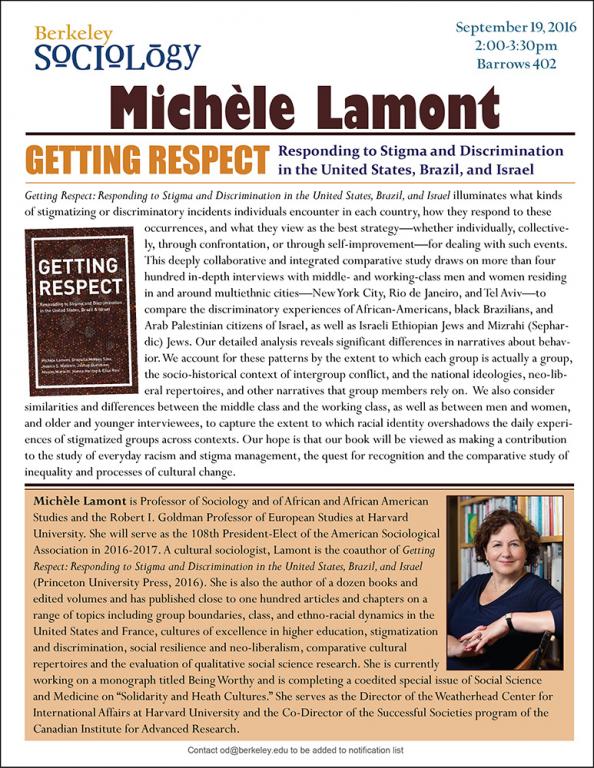 Getting Respect: Responding to Stigma and Discrimination in the United States, Brazil, and Israel illuminates what kinds of stigmatizing or discriminatory incidents individuals encounter in each country, how they respond to these occurrences, and what they view as the best strategy—whether individually, collectively, through confrontation, or through self-improvement—for dealing with such events. This deeply collaborative and integrated comparative study draws on more than four hundred in-depth interviews with middle- and working-class men and women residing in and around multiethnic cities—New York City, Rio de Janeiro, and Tel Aviv—to compare the discriminatory experiences of African-Americans, black Brazilians, and Arab Palestinian citizens of Israel, as well as Israeli Ethiopian Jews and Mizrahi (Sephardic) Jews. Our detailed analysis reveals significant differences in narratives about behavior. We account for these patterns by the extent to which each group is actually a group, the socio-historical context of intergroup conflict, and the national ideologies, neo-liberal repertoires, and other narrativesthat group members rely on.  We also consider similarities and differences between the middle class and the working class, as well as between men and women, and older and younger interviewees, to capture the extent to which racial identity overshadows the daily experiences of stigmatized groups across contexts. Our hope is that our book will be viewed as making a contribution to the study of everyday racism and stigma management, the quest for recognition and the comparative study of inequality and processes of cultural change.

Michèle Lamont is Professor of Sociology and of African and African American Studies and the Robert I. Goldman Professor of European Studies at Harvard University. She will serve as the 108th President-Elect of the American Sociological Association in 2016-2017. A cultural sociologist, Lamont is the coauthor of Getting Respect: Responding to Stigma and Discrimination in the United States, Brazil, and Israel (Princeton University Press, 2016). She is also the author of a dozen books and edited volumes and has published close to one hundred articles and chapters on a range of topics including group boundaries, class, and ethno-racial dynamics in the United States and France, cultures of excellence in higher education, stigmatization and discrimination, social resilience and neo-liberalism, comparative cultural repertoires and the evaluation of qualitative social science research. She is currently working on a monograph titled Being Worthy and is completing a coedited special issue of Social Science and Medicine on “Solidarity and Heath Cultures.” She serves as the Director of the Weatherhead Center for International Affairs at Harvard University and the Co-Director of the Successful Societies program of the Canadian Institute for Advanced Research.