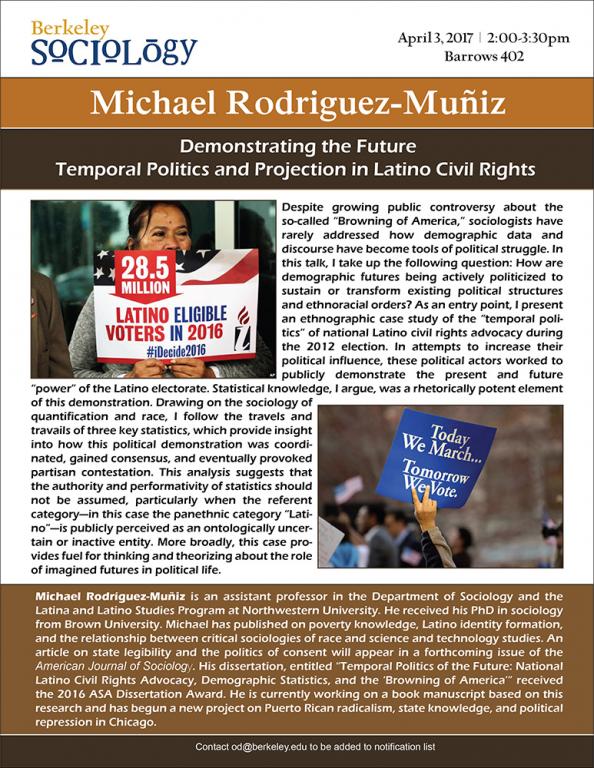 Despite growing public controversy about the so-called “Browning of America,” sociologists have rarely addressed how demographic data and discourse have become tools of political struggle. In this talk, I take up the following question: How are demographic futures being actively politicized to sustain or transform existing political structures and ethnoracial orders? As an entry point, I present an ethnographic case study of the “temporal politics” of national Latino civil rights advocacy during the 2012 election. In attempts to increase their political influence, these political actors worked to publicly demonstrate the present and future “power” of the Latino electorate. Statistical knowledge, I argue, was a rhetorically potent element of this demonstration. Drawing on the sociology of quantification and race, I follow the travels and travails of three key statistics, which provide insight into how this political demonstration was coordinated, gained consensus, and eventually provoked partisan contestation. This analysis suggests that the authority and performativity of statistics should not be assumed, particularly when the referent category—in this case the panethnic category “Latino”—is publicly perceived as an ontologically uncertain or inactive entity. More broadly, this case provides fuel for thinking and theorizing about the role of imagined futures in political life.

Michael Rodríguez-Muñiz is an assistant professor in the Department of Sociology and the Latina and Latino Studies Program at Northwestern University. He received his PhD in sociology from Brown University. Michael has published on poverty knowledge, Latino identity formation, and the relationship between critical sociologies of race and science and technology studies. An article on state legibility and the politics of consent will appear in a forthcoming issue of the American Journal of Sociology. His dissertation, entitled “Temporal Politics of the Future: National Latino Civil Rights Advocacy, Demographic Statistics, and the ‘Browning of America’” received the 2016 ASA Dissertation Award. He is currently working on a book manuscript based on this research and has begun a new project on Puerto Rican radicalism, state knowledge, and political repression in Chicago.