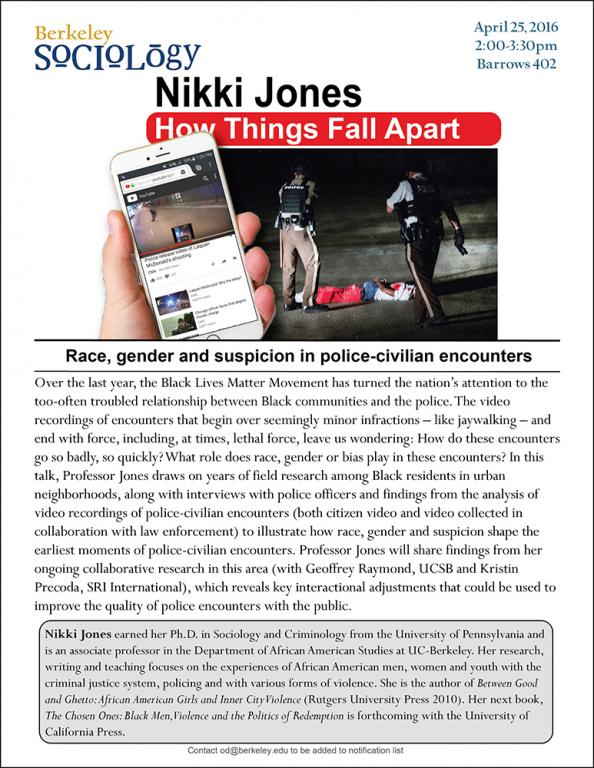 Over the last year, the Black Lives Matter Movement has turned the nation’s attention to the too-often troubled relationship between Black communities and the police. The video recordings of encounters that begin over seemingly minor infractions – like jaywalking – and end with force, including, at times, lethal force, leave us wondering: How do these encounters go so badly, so quickly? What role does race, gender or bias play in these encounters? In this talk, Professor Jones draws on years of field research among Black residents in urban neighborhoods, along with interviews with police officers and findings from the analysis of video recordings of police-civilian encounters (both citizen video and video collected in collaboration with law enforcement) to illustrate how race, gender and suspicion shape the earliest moments of police-civilian encounters. Professor Jones will share findings from her ongoing collaborative research in this area (with Geoffrey Raymond, UCSB and Kristin Precoda, SRI International), which reveals key interactional adjustments that could be used to improve the quality of police encounters with the public.

Nikki Jones earned her Ph.D. in Sociology and Criminology from the University of Pennsylvania and is an associate professor in the Department of African American Studies at UC-Berkeley. Her research, writing and teaching focuses on the experiences of African American men, women and youth with the criminal justice system, policing and with various forms of violence. She is the author of Between Good and Ghetto: African American Girls and Inner City Violence (Rutgers University Press 2010). Her next book, The Chosen Ones: Black Men, Violence and the Politics of Redemptionis forthcoming with the University of California Press.