Patrick Sharkey. Violence and Urban Inequality after the Crime Decline 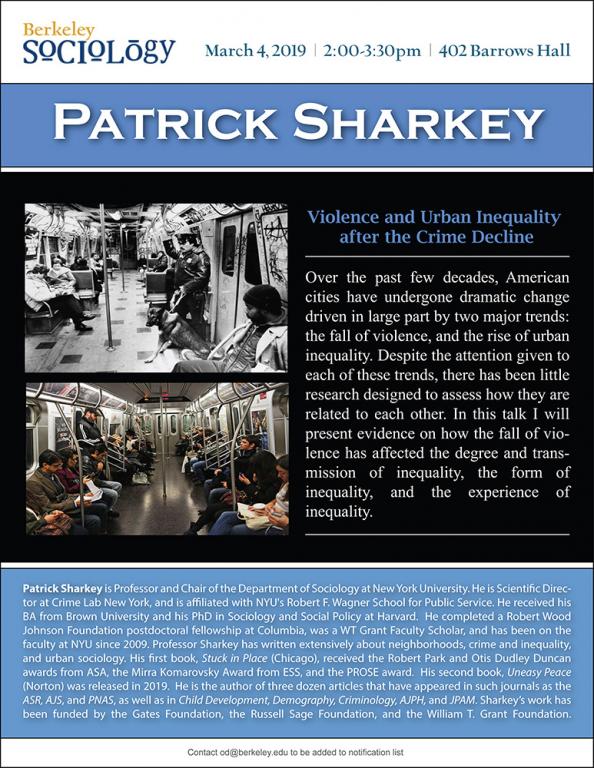 Patrick Sharkey is Professor and Chair of the Department of Sociology at New York University. He is Scientific Director at Crime Lab New York, and is affiliated with NYU's Robert F. Wagner School for Public Service. He received his BA from Brown University and his PhD in Sociology and Social Policy at Harvard.  He completed a Robert Wood Johnson Foundation postdoctoral fellowship at Columbia, was a WT Grant Faculty Scholar, and has been on the faculty at NYU since 2009. Professor Sharkey has written extensively about neighborhoods, crime and inequality, and urban sociology. His first book, Stuck in Place (Chicago), received the Robert Park and Otis Dudley Duncan awards from ASA, the Mirra Komarovsky Award from ESS, and the PROSE award.  His second book, Uneasy Peace (Norton) was released in 2019.  He is the author of three dozen articles that have appeared in such journals as the ASR, AJS, and PNAS, as well as in Child Development, Demography, Criminology, AJPH, and JPAM. Sharkey’s work has been funded by the Gates Foundation, the Russell Sage Foundation, and the William T. Grant Foundation.