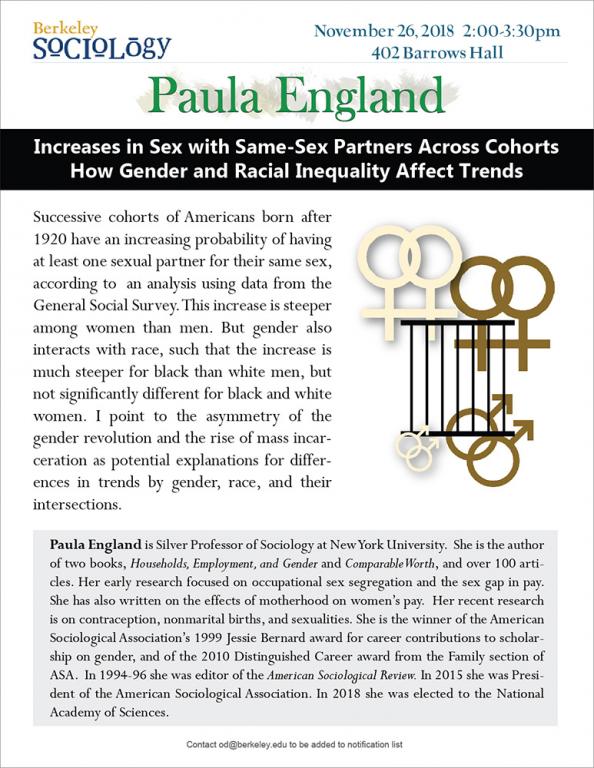 Increases in Sex with Same-Sex Partners Across Cohorts: How Gender and Racial Inequality Affect Trends

Successive cohorts of Americans born after 1920 have an increasing probability of having at least one sexual partner for their same sex, according to  an analysis using data from the General Social Survey. This increase is steeper among women than men. But gender also interacts with race, such that the increase is much steeper for black than white men, but not significantly different for black and white women. I point to the asymmetry of the gender revolution and the rise of mass incarceration as potential explanations for differences in trends by gender, race, and their intersections.

Paula England is Silver Professor of Sociology at New York University.  She is the author of two books, Households, Employment, and Gender and Comparable Worth, and over 100 articles. Her early research focused on occupational sex segregation and the sex gap in pay.  She has also written on the effects of motherhood on women’s pay.  Her recent research is on contraception, nonmarital births, and sexualities. She is the winner of the American Sociological Association’s 1999 Jessie Bernard award for career contributions to scholarship on gender, and of the 2010 Distinguished Career award from the Family section of ASA.  In 1994-96 she was editor of the American Sociological Review, making some friends and more enemies. In 2015 she was President of the American Sociological Association. In 2018 she was elected to the National Academies of Sciences, which made her recall how, shortly after Mike Hout was elected, she was asked to write a letter to support his getting a raise (and she firmly asserts that no quid pro quo was involved).