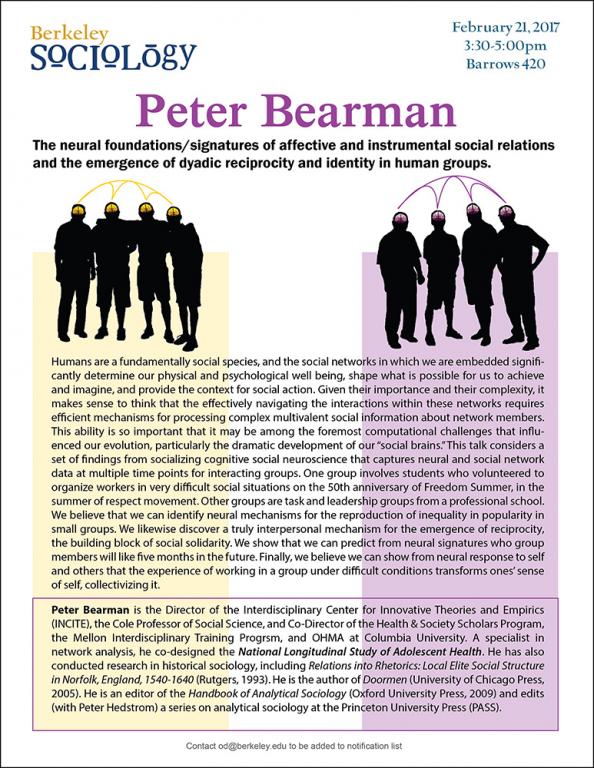 The neural foundations/signatures of affective and instrumental social relations and the emergence of dyadic reciprocity and identity in human groups.

Humans are a fundamentally social species, and the social networks in which we are embedded significantly determine our physical and psychological well being, shape what is possible for us to achieve and imagine, and provide the context for social action. Given their importance and their complexity, it makes sense to think that the effectively navigating the interactions within these networks requires efficient mechanisms for processing complex multivalent social information about network members. This ability is so important that it may be among the foremost computational challenges that influenced our evolution, particularly the dramatic development of our “social brains.” This talk considers a set of findings from socializing cognitive social neuroscience that captures neural and social network data at multiple time points for interacting groups. One group involves students who volunteered to organize workers in very difficult social situations on the 50th anniversary of Freedom Summer, in the summer of respect movement. Other groups are task and leadership groups from a professional school. We believe that we can identify neural mechanisms for the reproduction of inequality in popularity in small groups. We likewise discover a truly interpersonal mechanism for the emergence of reciprocity, the building block of social solidarity. We show that we can predict from neural signatures who group members will like five months in the future. Finally, we believe we can show from neural response to self and others that the experience of working in a group under difficult conditions transforms ones’ sense of self, collectivizing it.

Peter Bearman is the Director of the Interdisciplinary Center for Innovative Theories and Empirics (INCITE), the Cole Professor of Social Science, and Co-Director of the Health & Society Scholars Program, the Mellon Interdisciplinary Training Progrsm, and OHMA at Columbia University. A specialist in network analysis, he co-designed the National Longitudinal Study of Adolescent Health. He has also conducted research in historical sociology, including Relations into Rhetorics: Local Elite Social Structure in Norfolk, England, 1540-1640 (Rutgers, 1993). He is the author of Doormen (University of Chicago Press, 2005). He is an editor of the Handbook of Analytical Sociology (Oxford University Press, 2009) and edits (with Peter Hedstrom) a series on analytical sociology at the Princeton University Press (PASS).