Robert Braun. Protectors of Pluralism: Christian Minorities and the Rescue of Jews during the Holocaust 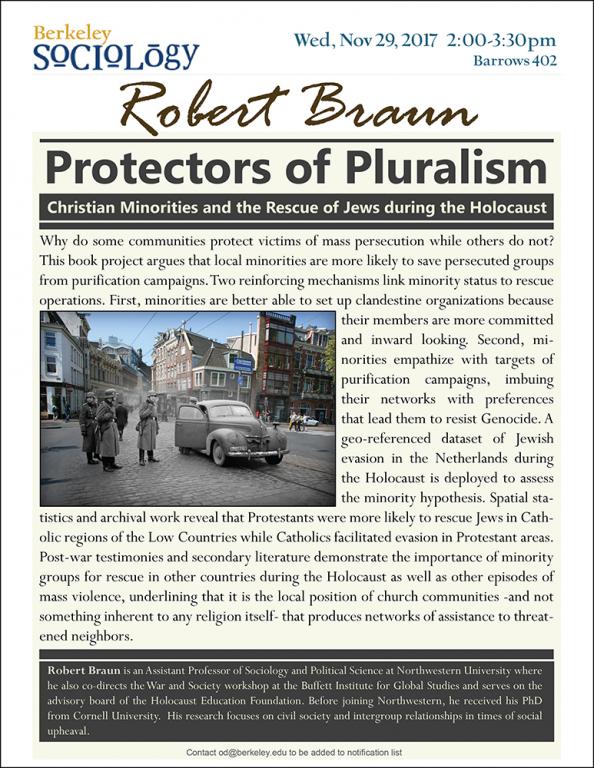 Protectors of Pluralism: Christian Minorities and the Rescue of Jews during the Holocaust

Why do some communities protect victims of mass persecution​ while others do not? This book project argues that local minorities are more likely to save persecuted groups from purification campaigns. Two reinforcing mechanisms link minority status to rescue operations. First, minorities are better able to set up clandestine organizations because their members are more committed and inward looking. Second, minorities empathize with targets of purification campaigns, imbuing their networks with preferences that lead them to resist Genocide. A geo-referenced dataset of Jewish evasion in the Netherlands during the Holocaust is deployed to assess the minority hypothesis. Spatial statistics and archival work reveal that Protestants were more likely to rescue Jews in Catholic regions of the Low Countries while Catholics facilitated evasion in Protestant areas. Post-war testimonies and secondary literature demonstrate the importance of minority groups for rescue in other countries during the Holocaust as well as other episodes of mass violence, underlining that it is the local position of church communities -and not something inherent to any religion itself- that produces networks of assistance to threatened neighbors.

Robert Braun is an Assistant Professor of Sociology and Political Science at Northwestern University where he also co-directs the War and Society workshop at the Buffett Institute for Global Studies and serves on the advisory board of the Holocaust Education Foundation. Before joining Northwestern, he received his Phd from Cornell University.  His research focuses on civil society and intergroup relationships in times of social upheaval. ​