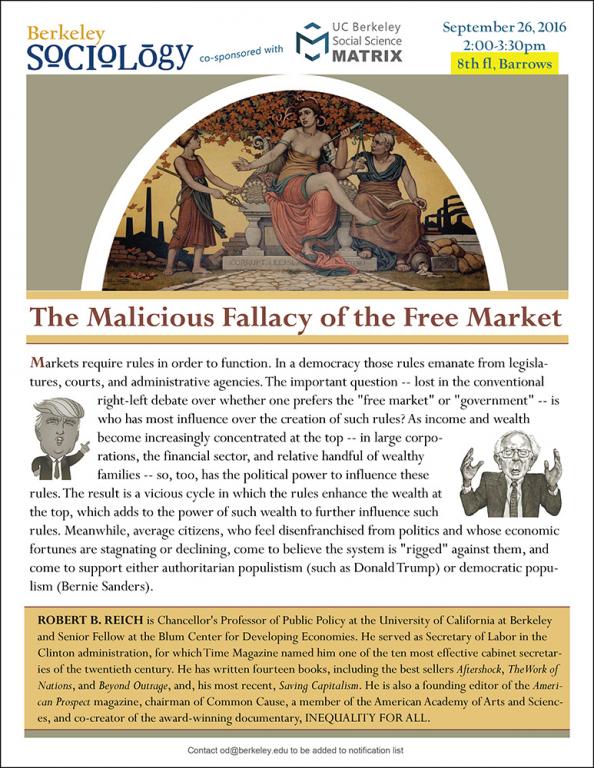 The Malicious Fallacy of the Free Market

Markets require rules in order to function. In a democracy those rules emanate from legislatures, courts, and administrative agencies. The important question -- lost in the conventional right-left debate over whether one prefers the "free market" or "government" -- is who has most influence over the creation of such rules? As income and wealth become increasingly concentrated at the top -- in large corporations, the financial sector, and relative handful of wealthy families -- so, too, has the political power to influence these rules. The result is a vicious cycle in which the rules enhance the wealth at the top, which adds to the power of such wealth to further influence such rules. Meanwhile, average citizens, who feel disenfranchised from politics and whose economic fortunes are stagnating or declining, come to believe the system is "rigged" against them, and come to support either authoritarian populistism (such as Donald Trump) or democratic populism (Bernie Sanders).

ROBERT B. REICH is Chancellor's Professor of Public Policy at the University of California at Berkeley and Senior Fellow at the Blum Center for Developing Economies. He served as Secretary of Labor in the Clinton administration, for which Time Magazine named him one of the ten most effective cabinet secretaries of the twentieth century. He has written fourteen books, including the best sellers Aftershock, The Work of Nations, and Beyond Outrage, and, his most recent, Saving Capitalism. He is also a founding editor of the American Prospect magazine, chairman of Common Cause, a member of the American Academy of Arts and Sciences, and co-creator of the award-winning documentary, INEQUALITY FOR ALL.