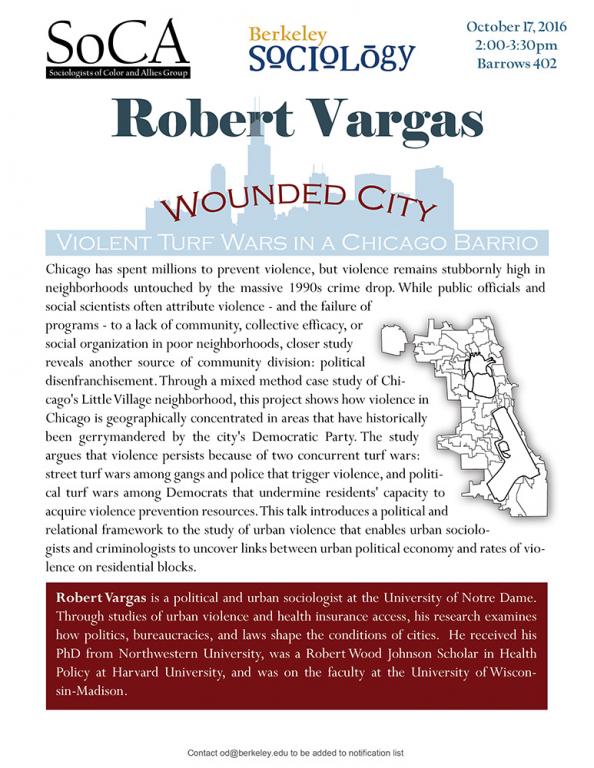 Chicago has spent millions to prevent violence, but violence remains stubbornly high in neighborhoods untouched by the massive 1990s crime drop. While public officials and social scientists often attribute violence - and the failure of programs - to a lack of community, collective efficacy, or social organization in poor neighborhoods, closer study reveals another source of community division: political disenfranchisement. Through a mixed method case study of Chicago's Little Village neighborhood, this project shows how violence in Chicago is geographically concentrated in areas that have historically been gerrymandered by the city's Democratic party. The study argues that violence persists because of two concurrent turf wars: street turf wars among gangs and police that trigger violence, and political turf wars among Democrats that undermine residents' capacity to acquire violence prevention resources. This talk introduces a political and relational framework to the study of urban violence that enables urban sociologists and criminologists to uncover links between urban political economy and rates of violence on residential blocks.

Robert Vargas is a political and urban sociologist at the University of Notre Dame. Through studies of urban violence and health insurance access, his research examines how politics, bureaucracies, and laws shape the conditions of cities.  He received his PhD from Northwestern University, was a Robert Wood Johnson Scholar in Health Policy at Harvard University, and was on the faculty at the University of Wisconsin-Madison.