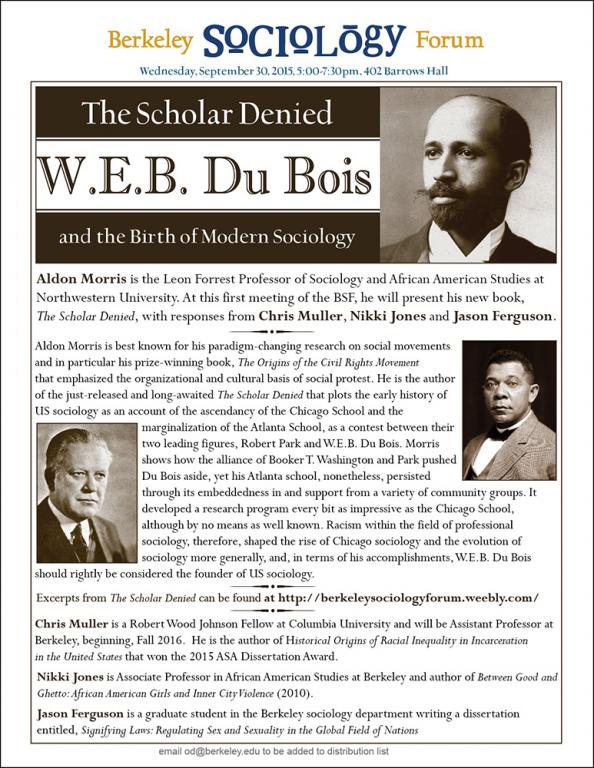 W.E.B. Du Bois and the Birth of Modern Sociology

Aldon Morris is theLeon Forrest Professor of Sociology and African American Studies at Northwestern University. He will present his new book, The Scholar Denied, with responses from Chris Muller, Nikki Jones and Jason Ferguson.

Aldon Morris is best known for his paradigm-changing research on social movements and in particular his prize-winning book, The Origins of the Civil Rights Movement that emphasized the organizational and cultural basis of social protest. He is the author of the just-released and long-awaited The Scholar Denied that plots the early history of US sociology as an account of the ascendancy of the Chicago School and the marginalization of the Atlanta School, as represented by a contest between their two leading figures, Robert Park and W.E.B. Du Bois. Morris shows how the alliance of Booker T. Washington and Park pushed Du Bois aside, yet his Atlanta school, nonetheless, persisted through its embeddedness in and support from a variety of community groups. It developed a research program every bit as impressive as the Chicago School, although by no means as well known. Racism within the field of professional sociology, therefore, shaped the rise of Chicago sociology and the evolution of sociology more generally, and, in terms of his accomplishments, W.E.B. Du Bois should rightly be considered the founder of US sociology.

Excerpts from The Scholar Denied can be found at http://berkeleysociologyforum.weebly.com/

Chris Muller is a Robert Wood Johnson Fellow at Columbia University and will be Assistant Professor at Berkeley, beginning, Fall 2016.  He is the author of Historical Origins of Racial Inequality in Incarceration in the United States that won the 2015 ASA Dissertation Award.

Jason Ferguson is a graduate student in the Berkeley sociology department writing a dissertation entitled, Signifying Laws: Regulating Sex and Sexuality in the Global Field of Nations