Bart Bonikowski. The Mobilization of Resentment: Populism, Nationalism, and Authoritarianism in the United States and Europe 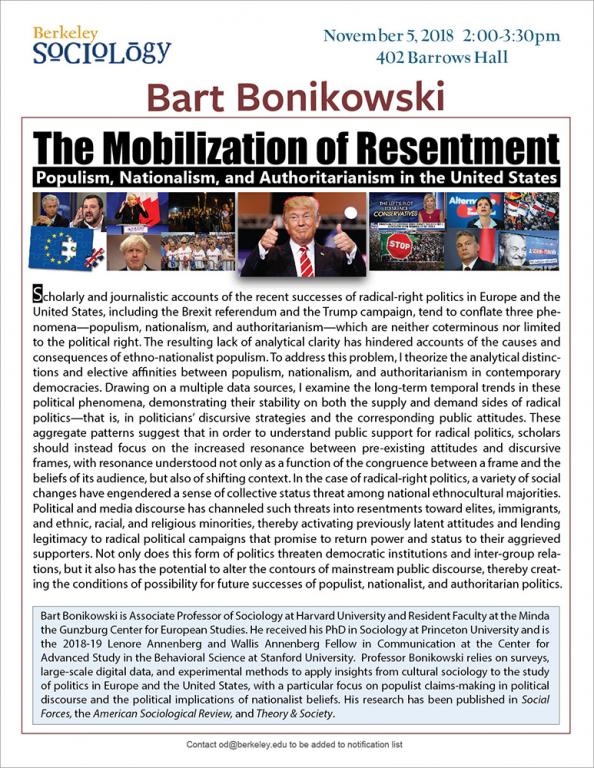 The Mobilization of Resentment: Populism, Nationalism, and Authoritarianism in the United States and Europe

Scholarly and journalistic accounts of the recent successes of radical-right politics in Europe and the United States, including the Brexit referendum and the Trump campaign, tend to conflate three phenomena—populism, nationalism, and authoritarianism—which are neither coterminous nor limited to the political right. The resulting lack of analytical clarity has hindered accounts of the causes and consequences of ethno-nationalist populism. To address this problem, I theorize the analytical distinctions and elective affinities between populism, nationalism, and authoritarianism in contemporary democracies. Drawing on a multiple data sources, I examine the long-term temporal trends in these political phenomena, demonstrating their stability on both the supply and demand sides of radical politics—that is, in politicians’ discursive strategies and the corresponding public attitudes. These aggregate patterns suggest that in order to understand public support for radical politics, scholars should instead focus on the increased resonance between pre-existing attitudes and discursive frames, with resonance understood not only as a function of the congruence between a frame and the beliefs of its audience, but also of shifting context. In the case of radical-right politics, a variety of social changes have engendered a sense of collective status threat among national ethnocultural majorities. Political and media discourse has channeled such threats into resentments toward elites, immigrants, and ethnic, racial, and religious minorities, thereby activating previously latent attitudes and lending legitimacy to radical political campaigns that promise to return power and status to their aggrieved supporters. Not only does this form of politics threaten democratic institutions and inter-group relations, but it also has the potential to alter the contours of mainstream public discourse, thereby creating the conditions of possibility for future successes of populist, nationalist, and authoritarian politics.

Bart Bonikowski is Associate Professor of Sociology at Harvard University and Resident Faculty at the Minda the Gunzburg Center for European Studies. He received his PhD in Sociology at Princeton University and is the 2018-19 Lenore Annenberg and Wallis Annenberg Fellow in Communication at the Center for Advanced Study in the Behavioral Science at Stanford University.  Professor Bonikowski relies on surveys, large-scale digital data, and experimental methods to apply insights from cultural sociology to the study of politics in Europe and the United States, with a particular focus on populist claims-making in political discourse and the political implications of nationalist beliefs. His research has been published in Social Forces, the American Sociological Review, and Theory & Society.