Berkeley Sociology Forum. Trans: Gender and Race in an Age of Unsettled Identities 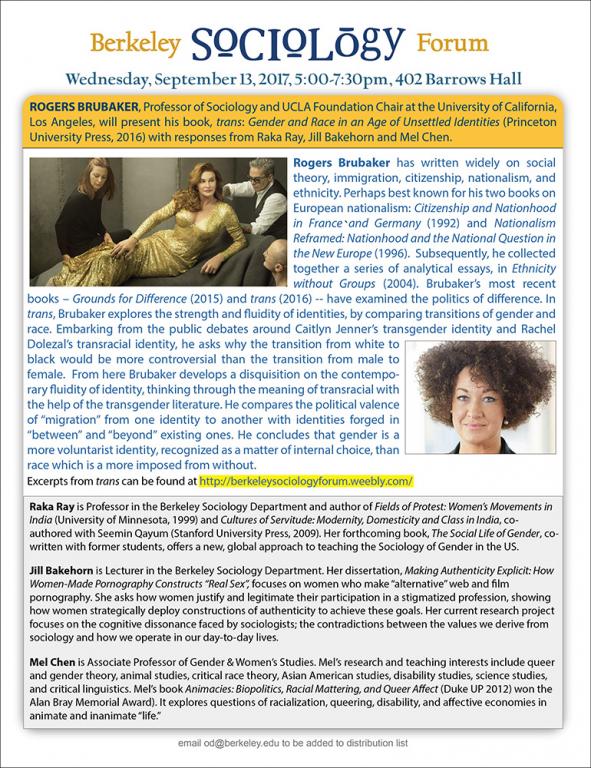 TRANS: GENDER AND RACE IN AN AGE OF UNSETTLED IDENTITIES

ROGERS BRUBAKER, Professor of Sociology and UCLA Foundation Chair at the University of California, Los Angeles, will present his book, trans: Gender and Race in an Age of Unsettled Identities (Princeton University Press, 2016) with responses from Raka Ray, Jill Bakehorn and Mel Chen.

Rogers Brubaker has written widely on social theory, immigration, citizenship, nationalism, and ethnicity. Perhaps best known for his two books on European nationalism: Citizenship and Nationhood in France and Germany (1992) and Nationalism Reframed: Nationhood and the National Question in the New Europe (1996).  Subsequently, he collected together a series of analytical essays, in Ethnicity without Groups (2004). Brubaker’s most recent books – Grounds for Difference (2015) and trans (2016) -- have examined the politics of difference. In trans, Brubaker explores the strength and fluidity of identities, by comparing transitions of gender and race. Embarking from the public debates around Caitlyn Jenner’s transgender identity and Rachel Dolezal’s transracial identity, he asks why the transition from white to black would be more controversial than the transition from male to female.  From here Brubaker develops a disquisition on the contemporary fluidity of identity, thinking through the meaning of transracial with the help of the transgender literature. He compares the political valence of “migration” from one identity to another with identities forged in “between” and “beyond” existing ones. He concludes that gender is a more voluntarist identity, recognized as a matter of internal choice, than race which is a more imposed from without.

Excerpts from trans can be found at http://berkeleysociologyforum.weebly.com/

Raka Ray is Professor in the Berkeley Sociology Department and author of Fields of Protest: Women’s Movements in India (University of Minnesota, 1999) and Cultures of Servitude: Modernity, Domesticity and Class in India, co-authored with Seemin Qayum (Stanford University Press, 2009). Her forthcoming book, The Social Life of Gender, co-written with former students, offers a new, global approach to teaching the Sociology of Gender in the US.

Jill Bakehorn is Lecturer in the Berkeley Sociology Department. Her dissertation, Making Authenticity Explicit: How Women-Made Pornography Constructs “Real Sex”, focuses on women who make “alternative” web and film pornography. She asks how women justify and legitimate their participation in a stigmatized profession, showing how women strategically deploy constructions of authenticity to achieve these goals. Her current research project focuses on the cognitive dissonance faced by sociologists; the contradictions between the values we derive from sociology and how we operate in our day-to-day lives.