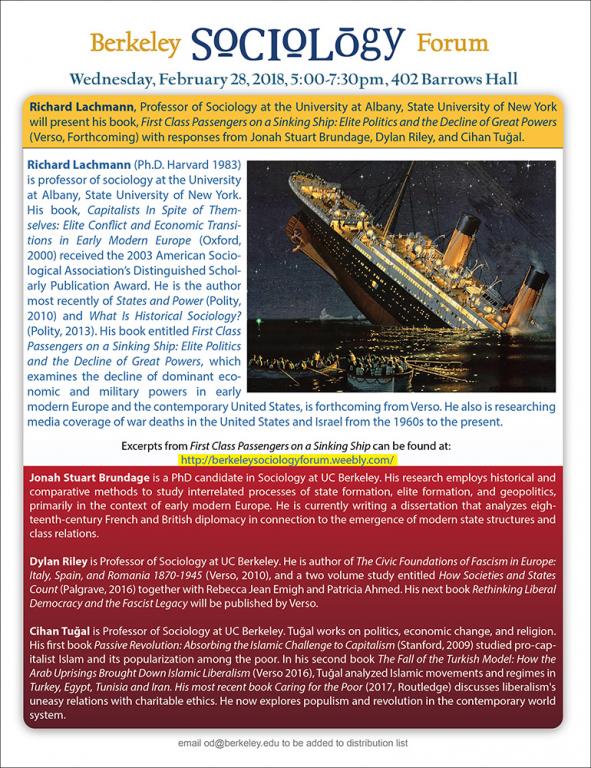 Richard Lachmann, Professor of Sociology at the University at Albany, State University of New Yorkwill present his book, First Class Passengers on a Sinking Ship: Elite Politics and the Decline of Great Powers (Verso, Forthcoming) with responses from Jonah Stuart Brundage, Dylan Riley, and Cihan Tuğal

Richard Lachmann (Ph.D. Harvard 1983) is professor of sociology at the University at Albany, State University of New York. His book, Capitalists In Spite of Themselves: Elite Conflict and Economic Transitions in Early Modern Europe (Oxford, 2000) received the 2003 American Sociological Association’s Distinguished Scholarly Publication Award. He is the author most recently of States and Power (Polity, 2010) and What Is Historical Sociology? (Polity, 2013). His book entitled First Class Passengers on a Sinking Ship: Elite Politics and the Decline of Great Powers, which examines the decline of dominant economic and military powers in early modern Europe and the contemporary United States, is forthcoming from Verso. He also is researching media coverage of war deaths in the United States and Israel from the 1960s to the present.

Jonah Stuart Brundage is a PhD candidate in Sociology at UC Berkeley. His research employs historical and comparative methods to study interrelated processes of state formation, elite formation, and geopolitics, primarily in the context of early modern Europe. He is currently writing a dissertation that analyzes eighteenth-century French and British diplomacy in connection to the emergence of modern state structures and class relations.

Dylan Riley is Professor of Sociology at UC Berkeley. He is author of The Civic Foundations of Fascism in Europe: Italy, Spain, and Romania 1870-1945 (Verso, 2010), and a two volume study entitled How Societies and States Count(Palgrave, 2016)together with Rebecca Jean Emigh and Patricia Ahmed. His next book Rethinking Liberal Democracy and the Fascist Legacy will be published by Verso.

Cihan Tuğal is Professor of Sociology at UC Berkeley. Tuğal works on politics, economic change, and religion. His first book Passive Revolution: Absorbing the Islamic Challenge to Capitalism (Stanford, 2009) studied pro-capitalist Islam and its popularization among the poor. In his second book The Fall of the Turkish Model: How the Arab Uprisings Brought Down Islamic Liberalism (Verso 2016), Tuğal analyzed Islamic movements and regimes in Turkey, Egypt, Tunisia and Iran. His most recent book Caring for the Poor (2017, Routledge) discusses liberalism's uneasy relations with charitable ethics. He now explores populism and revolution in the contemporary world system.