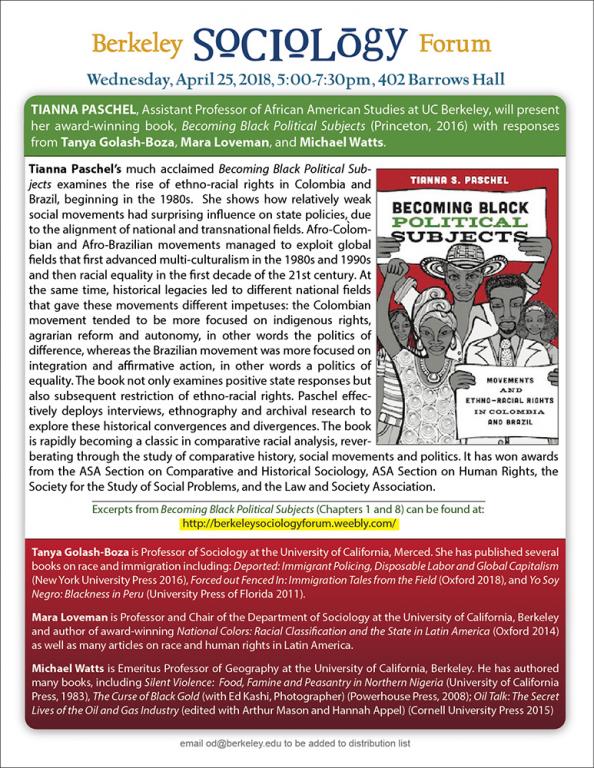 Movements and Ethno-Racial Rights in Colombia and Brazil

Tianna Paschel’s much acclaimed Becoming Black Political Subjects examines the rise of ethno-racial rights in Colombia and Brazil, beginning in the 1980s.  She shows how relatively weak social movements had surprising influence on state policies, due to the alignment of national and transnational fields. Afro-Colombian and Afro-Brazilian movements managed to exploit global fields that first advanced multi-culturalism in the 1980s and 1990s and then racial equality in the first decade of the 21st century. At the same time, historical legacies led to different national fields that gave these movements different impetuses: the Colombian movement tended to be more focused on indigenous rights, agrarian reform and autonomy, in other words the politics of difference, whereas the Brazilian movement was more focused on integration and affirmative action, in other words a politics of equality. The book not only examines positive state responses but also subsequent restriction of ethno-racial rights. Paschel effectively deploys interviews, ethnography and archival research to explore these historical convergences and divergences. The book is rapidly becoming a classic in comparative racial analysis, reverberating through the study of comparative history, social movements and politics. It has won awards from the ASA Section on Comparative and Historical Sociology, ASA Section on Human Rights, the Society for the Study of Social Problems, and the Law and Society Association.

Excerpts from Becoming Black Political Subjects (Chapters 1 and 8) can be found at http://berkeleysociologyforum.weebly.com/

Tanya Golash-Bozais Professor of Sociology at the University of California, Merced. She has published several books on race and immigration including: Deported: Immigrant Policing, Disposable Labor and Global Capitalism (New York University Press 2016), Forced out Fenced In: Immigration Tales from the Field (Oxford 2018), andYo Soy Negro: Blackness in Peru (University Press of Florida 2011).

Mara Loveman is Professor and Chair of the Department of Sociology at the University of California, Berkeley and author of award-winning National Colors: Racial Classification and the State in Latin America (Oxford 2014) as well as many articles on race and human rights in Latin America.

Michael Wattsis Emeritus Professor of Geography at the University of California, Berkeley. He has authored many books, including Silent Violence:  Food, Famine and Peasantry in Northern Nigeria (University of California Press, 1983), The Curse of Black Gold (with Ed Kashi, Photographer) (Powerhouse Press, 2008); Oil Talk: The Secret Lives of the Oil and Gas Industry (edited with Arthur Mason and Hannah Appel) (Cornell University Press 2015)