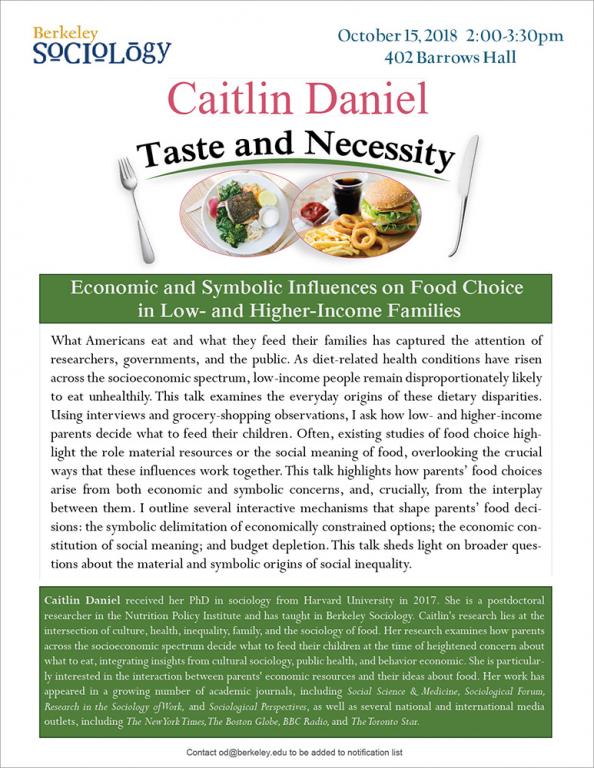 Taste and Necessity: Economic and Symbolic Influences on Food Choice in Low- and Higher-Income Families

What Americans eat and what they feed their families has captured the attention of researchers, governments, and the public. As diet-related health conditions have risen across the socioeconomic spectrum, low-income people remain disproportionately likely to eat unhealthily. This talk examines the everyday origins of these dietary disparities. Using interviews and grocery-shopping observations, I ask how low- and higher-income parents decide what to feed their children. Often, existing studies of food choice highlight the role material resources or the social meaning of food, overlooking the crucial ways that these influences work together. This talk highlights how parents’ food choices arise from both economic and symbolic concerns, and, crucially, from the interplay between them. I outline several interactive mechanisms that shape parents’ food decisions: the symbolic delimitation of economically constrained options; the economic constitution of social meaning; and budget depletion. This talk sheds light on broader questions about the material and symbolic origins of social inequality.

Caitlin Daniel received her PhD in sociology from Harvard University in 2017. She is a postdoctoral researcher in the Nutrition Policy Institute and has taught in Berkeley Sociology. Caitlin's research lies at the intersection of culture, health, inequality, family, and the sociology of food. Her research examines how parents across the socioeconomic spectrum decide what to feed their children at the time of heightened concern about what to eat, integrating insights from cultural sociology, public health, and behavior economic. She is particularly interested in the interaction between parents' economic resources and their ideas about food. Her work has appeared in a growing number of academic journals, including Social Science & Medicine, Sociological Forum, Research in the Sociology of Work, and Sociological Perspectives, as well as several national and international media outlets, including The New York Times, The Boston Globe, BBC Radio, and The Toronto Star.