Cybelle Fox. Save Our Senior Non-Citizens: The Extension of Old Age Assistance to Immigrants in the United States, 1935-1971 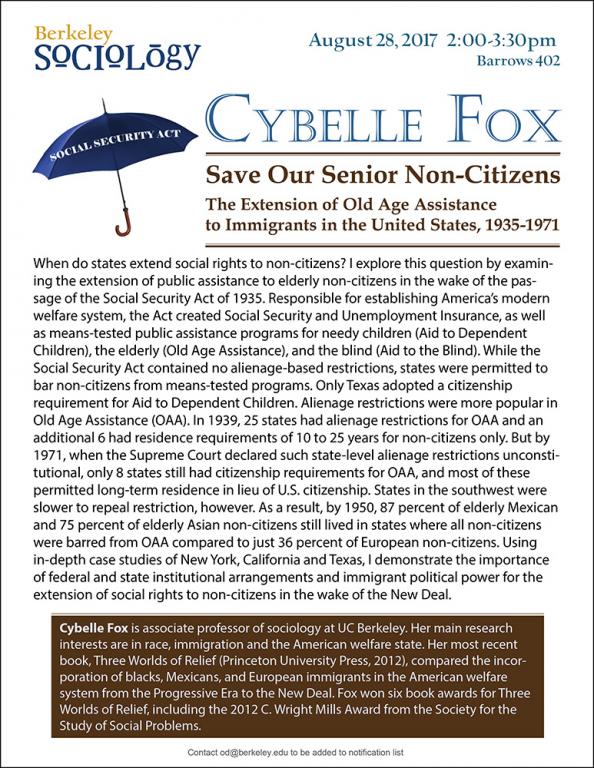 Save Our Senior Non-Citizens: The Extension of Old Age Assistance to Immigrants in the United States, 1935-1971

When do states extend social rights to non-citizens? I explore this question by examining the extension of public assistance to elderly non-citizens in the wake of the passage of the Social Security Act of 1935. Responsible for establishing America’s modern welfare system, the Act created Social Security and Unemployment Insurance, as well as means-tested public assistance programs for needy children (Aid to Dependent Children), the elderly (Old Age Assistance), and the blind (Aid to the Blind). While the Social Security Act contained no alienage-based restrictions, states were permitted to bar non-citizens from means-tested programs. Only Texas adopted a citizenship requirement for Aid to Dependent Children. Alienage restrictions were more popular in Old Age Assistance (OAA). In 1939, 25 states had alienage restrictions for OAA and an additional 6 had residence requirements of 10 to 25 years for non-citizens only. But by 1971, when the Supreme Court declared such state-level alienage restrictions unconstitutional, only 8 states still had citizenship requirements for OAA, and most of these permitted long-term residence in lieu of U.S. citizenship. States in the southwest were slower to repeal restriction, however. As a result, by 1950, 87 percent of elderly Mexican and 75 percent of elderly Asian non-citizens still lived in states where all non-citizens were barred from OAA compared to just 36 percent of European non-citizens. Using in-depth case studies of New York, California and Texas, I demonstrate the importance of federal and state institutional arrangements and immigrant political power for the extension of social rights to non-citizens in the wake of the New Deal.

Cybelle Fox is associate professor of sociology at UC Berkeley. Her main research interests are in race, immigration and the American welfare state. Her most recent book, Three Worlds of Relief (Princeton University Press, 2012), compared the incorporation of blacks, Mexicans, and European immigrants in the American welfare system from the Progressive Era to the New Deal. Fox won six book awards for Three Worlds of Relief, including the 2012 C. Wright Mills Award from the Society for the Study of Social Problems.