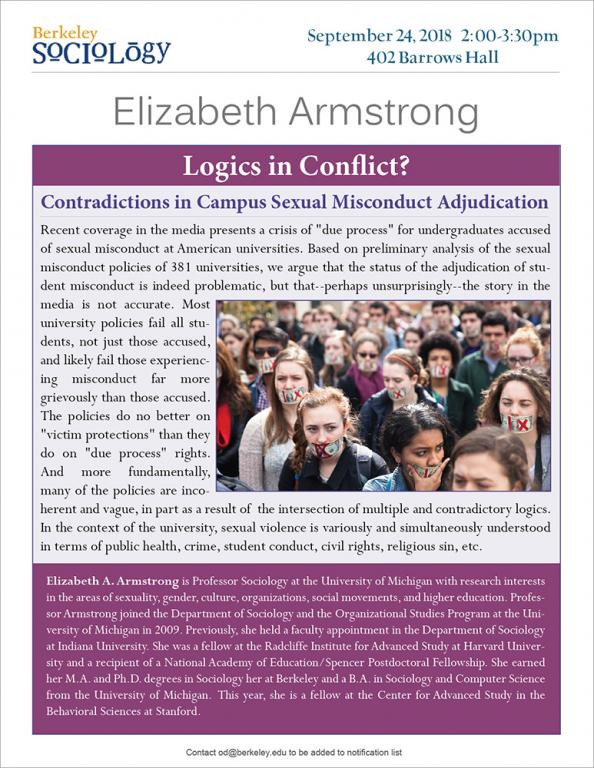 Recent coverage in the media presents a crisis of "due process" for undergraduates accused of sexual misconduct at American universities. Based on preliminary analysis of the sexual misconduct policies of 381 universities, we argue that the status of the adjudication of student misconduct is indeed problematic, but that--perhaps unsurprisingly--the story in the media is not accurate. Most university policies fail all students, not just those accused,  and likely fail those experiencing misconduct far more grievously than those accused. The policies do no better on "victim protections" than they do on "due process" rights. And more fundamentally, many of the policies are incoherent and vague, in part as a result of  the intersection of multiple and contradictory logics. In the context of the university, sexual violence is variously and simultaneously understood in terms of public health, crime, student conduct, civil rights, religious sin, etc.

Elizabeth A. Armstrong is Professor Sociology at the University of Michigan with research interests in the areas of sexuality, gender, culture, organizations, social movements, and higher education. Professor Armstrong joined the Department of Sociology and the Organizational Studies Program at the University of Michigan in 2009. Previously, she held a faculty appointment in the Department of Sociology at Indiana University. She was a fellow at the Radcliffe Institute for Advanced Study at Harvard University and a recipient of a National Academy of Education/Spencer Postdoctoral Fellowship. She earned her M.A. and Ph.D. degrees in Sociology her at Berkeley and a B.A. in Sociology and Computer Science from the University of Michigan.  This year, she is a fellow at the Center for Advanced Study in the Behavioral Sciences at Stanford.