Eric Klinenberg. Climate Change and the Future of Cities 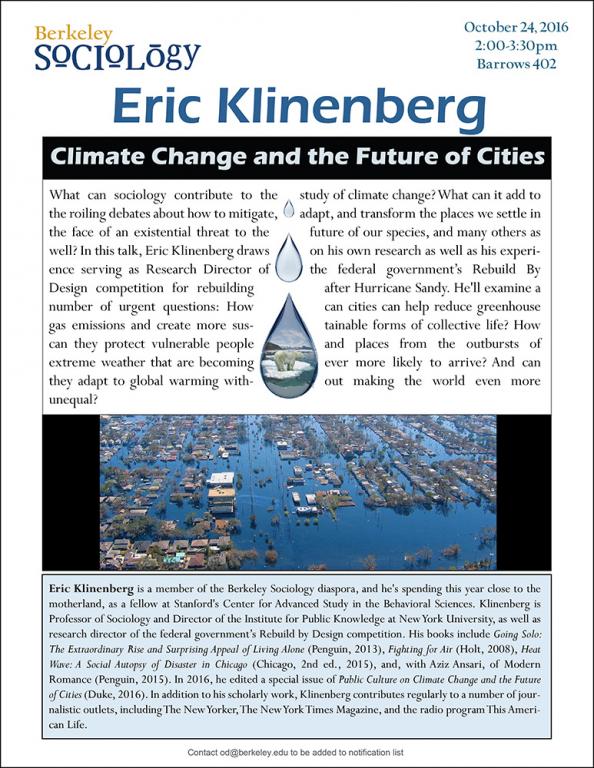 Climate Change and the Future of Cities

What can sociology contribute to the study of climate change? What can it add to the roiling debates about how to mitigate, adapt, and transform the places we settle in the face of an existential threat to the future of our species, and many others as well? In this talk, Eric Klinenberg draws on his own research as well as his experience serving as Research Director of the federal government’s Rebuild By Design competition for rebuilding after Hurricane Sandy. He'll examine a number of urgent questions: How can cities can help reduce greenhouse gas emissions and create more sustainable forms of collective life? How can they protect vulnerable people and places from the outbursts of extreme weather that are becoming ever more likely to arrive? And can they adapt to global warming without making the world even more unequal?

Eric Klinenberg is a member of the Berkeley Sociology diaspora, and he's spending this year close to the motherland, as a fellow at Stanford's Center for Advanced Study in the Behavioral Sciences. Klinenberg is Professor of Sociology and Director of the Institute for Public Knowledge at New York University, as well as research director of the federal government’s Rebuild by Design competition. His books include Going Solo: The Extraordinary Rise and Surprising Appeal of Living Alone (Penguin, 2013), Fighting for Air (Holt, 2008), Heat Wave: A Social Autopsy of Disaster in Chicago (Chicago, 2nd ed., 2015), and, with Aziz Ansari, of Modern Romance (Penguin, 2015). In 2016, he edited a special issue of Public Culture on Climate Change and the Future of Cities (Duke, 2016). In addition to his scholarly work, Klinenberg contributes regularly to a number of journalistic outlets, including The New Yorker, The New York Times Magazine, and the radio program This American Life.