Etienne Ollion. The Great Regression. Machine Learning, Econometrics, and the Future of Quantification.

In association with D-Lab and The Social Science Matrix: 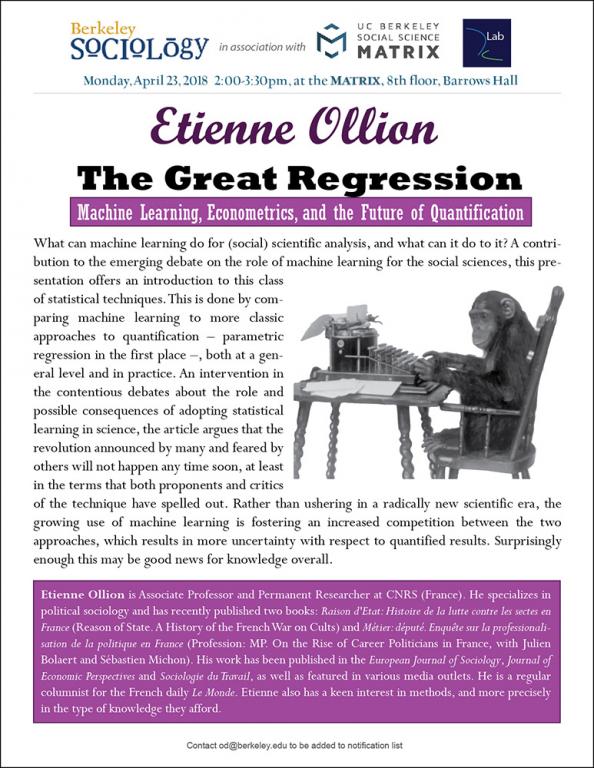 The Great Regression. Machine Learning, Econometrics, and the Future of Quantification.

What can machine learning do for (social) scientific analysis, and what can it do toit? A contribution to the emerging debate on the role of machine learning for the social sciences, this presentation offers an introduction to this class of statistical techniques. This is done by comparing machine learning to more classic approaches to quantification – parametric regression in the first place –, both at a general level and in practice. An intervention in the contentious debates about the role and possible consequences of adopting statistical learning in science, the article argues that the revolution announced by many and feared by others will not happen any time soon, at least in the terms that both proponents and critics of the technique have spelled out. Rather than ushering in a radically new scientific era, the growing use of machine learning is fostering an increased competition between the two approaches, which results in more uncertainty with respect to quantified results. Surprisingly enough this may be good news for knowledge overall.

Etienne Ollion is Associate Professor and Permanent Researcher at CNRS (France). He specializes in political sociology and has recently published two books: Raison d'Etat: Histoire de la lutte contre les sectes en France (Reason of State. A History of the French War on Cults) and Métier: député. Enquête sur la professionalisation de la politique en France (Profession: MP. On the Rise of Career Politicians in France, with Julien Bolaert and Sébastien Michon). His work has been published in the European Journal of Sociology, Journal of Economic Perspectives and Sociologie du Travail, as well as featured in various media outlets. He is a regular columnist for the French daily Le Monde. Etienne also has a keen interest in methods, and more precisely in the type of knowledge they afford.