Heather Haveman. Magazines and the Making of America: Modernization, Community, and Print Culture, 1741-1860 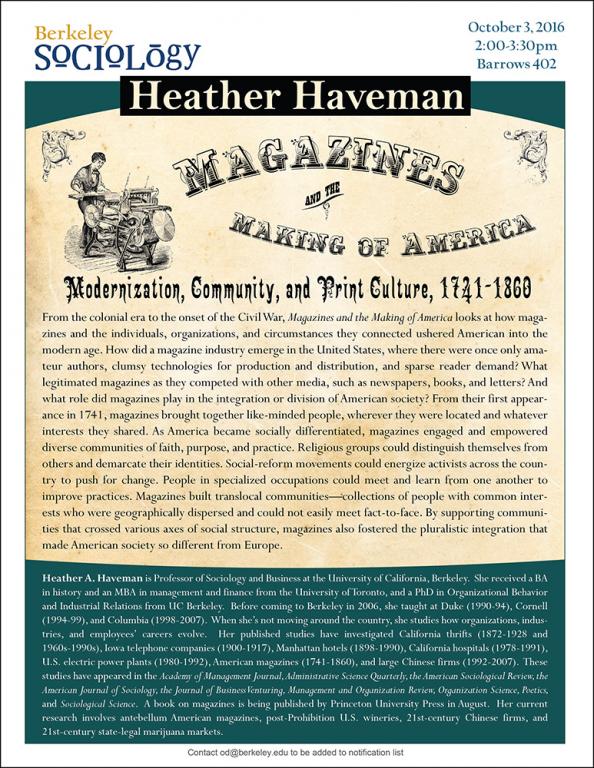 Magazines and the Making of America: Modernization, Community, and Print Culture, 1741-1860

From the colonial era to the onset of the Civil War, Magazines and the Making of America looks at how magazines and the individuals, organizations, and circumstances they connected ushered American into the modern age. How did a magazine industry emerge in the United States, where there were once only amateur authors, clumsy technologies for production and distribution, and sparse reader demand? What legitimated magazines as they competed with other media, such as newspapers, books, and letters? And what role did magazines play in the integration or division of American society? From their first appearance in 1741, magazines brought together like-minded people, wherever they were located and whatever interests they shared. As America became socially differentiated, magazines engaged and empowered diverse communities of faith, purpose, and practice. Religious groups could distinguish themselves from others and demarcate their identities. Social-reform movements could energize activists across the country to push for change. People in specialized occupations could meet and learn from one another to improve practices. Magazines built translocal communities—collections of people with common interests who were geographically dispersed and could not easily meet fact-to-face. By supporting communities that crossed various axes of social structure, magazines also fostered the pluralistic integration that made American society so different from Europe.

Heather A. Haveman is Professor of Sociology and Business at the University of California, Berkeley.  She received a BA in history and an MBA in management and finance from the University of Toronto, and a PhD in Organizational Behavior and Industrial Relations from UC Berkeley.  Before coming to Berkeley in 2006, she taught at Duke (1990-94), Cornell (1994-99), and Columbia (1998-2007).  When she’s not moving around the country, she studies how organizations, industries, and employees’ careers evolve.  Her published studies have investigated California thrifts (1872-1928 and 1960s-1990s), Iowa telephone companies (1900-1917), Manhattan hotels (1898-1990), California hospitals (1978-1991), U.S. electric power plants (1980-1992), American magazines (1741-1860), and large Chinese firms (1992-2007).  These studies have appeared in the Academy of Management Journal,Administrative Science Quarterly, the American Sociological Review, the American Journal of Sociology, the Journal of Business Venturing, Management and Organization Review, Organization Science, Poetics, and Sociological Science.  A book on magazines is being published by Princeton University Press in August.  Her current research involves antebellum American magazines, post-Prohibition U.S. wineries, 21st-century Chinese firms, and 21st-century state-legal marijuana markets.