Jacob Foster. Made to Know: Science as the Social Production of Collective Intelligence 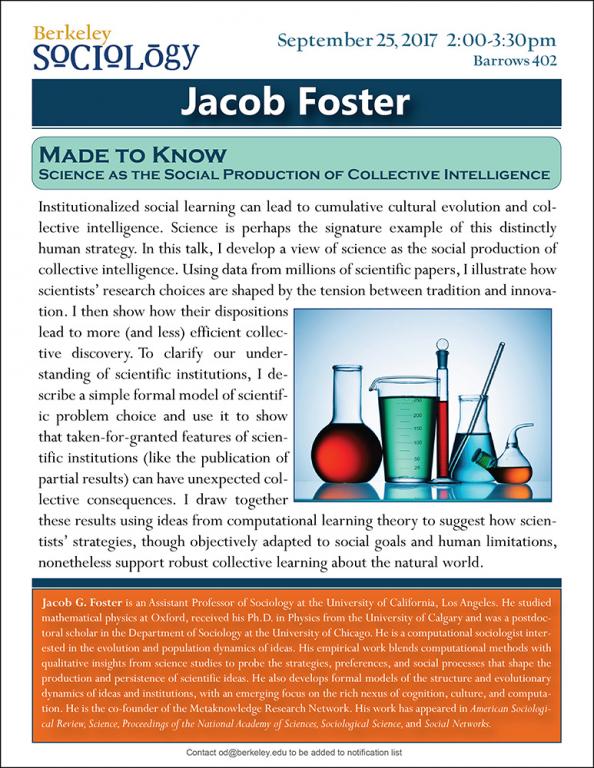 Made to Know: Science as the Social Production of Collective Intelligence
Institutionalized social learning can lead to cumulative cultural evolution and collective intelligence. Science is perhaps the signature example of this distinctly human strategy. In this talk, I develop a view of science as the social production of collective intelligence. Using data from millions of scientific papers, I illustrate how scientists’ research choices are shaped by the tension between tradition and innovation. I then show how their dispositions lead to more (and less) efficient collective discovery. To clarify our understanding of scientific institutions, I describe a simple formal model of scientific problem choice and use it to show that taken-for-granted features of scientific institutions (like the publication of partial results) can have unexpected collective consequences. I draw together these results using ideas from computational learning theory to suggest how scientists’ strategies, though objectively adapted to social goals and human limitations, nonetheless support robust collective learning about the natural world.

Jacob G. Foster is an Assistant Professor of Sociology at the University of California, Los Angeles. He studied mathematical physics at Oxford, received his Ph.D. in Physics from the University of Calgary and was a postdoctoral scholar in the Department of Sociology at the University of Chicago. He is a computational sociologist interested in the evolution and population dynamics of ideas. His empirical work blends computational methods with qualitative insights from science studies to probe the strategies, preferences, and social processes that shape the production and persistence of scientific ideas. He also develops formal models of the structure and evolutionary dynamics of ideas and institutions, with an emerging focus on the rich nexus of cognition, culture, and computation. He is the co-founder of the Metaknowledge Research Network. His work has appeared in American Sociological Review, Science, Proceedings of the National Academy of Sciences, Sociological Science, and Social Networks.