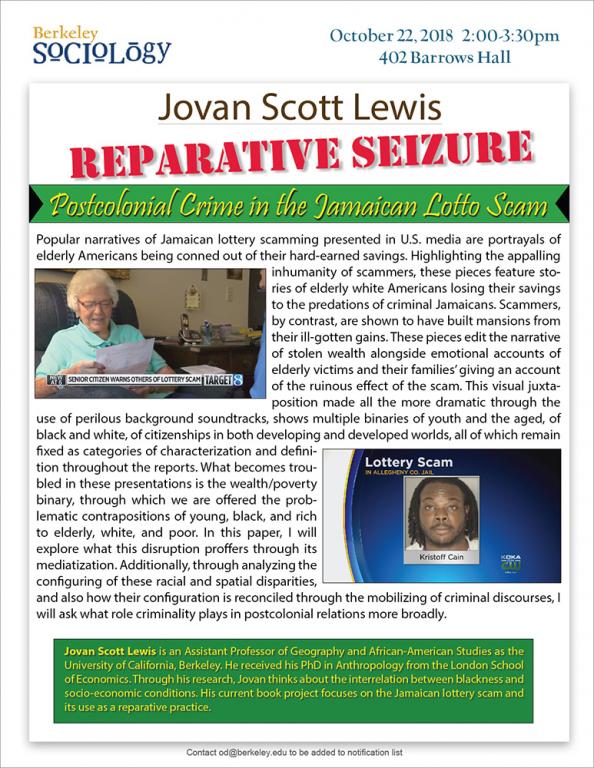 Popular narratives of Jamaican lottery scamming presented in U.S. media are portrayals of elderly Americans being conned out of their hard-earned savings. Highlighting the appalling inhumanity of scammers, these pieces feature stories of elderly white Americans losing their savings to the predations of criminal Jamaicans. Scammers, by contrast, are shown to have built mansions from their ill-gotten gains. These pieces edit the narrative of stolen wealth alongside emotional accounts of elderly victims and their families’ giving an account of the ruinous effect of the scam. This visual juxtaposition made all the more dramatic through the use of perilous background soundtracks, shows multiple binaries of youth and the aged, of black and white, of citizenships in both developing and developed worlds, all of which remain fixed as categories of characterization and definition throughout the reports. What becomes troubled in these presentations is the wealth/poverty binary, through which we are offered the problematic contrapositions of young, black, and rich to elderly, white, and poor. In this paper, I will explore what this disruption proffers through its mediatization. Additionally, through analyzing the configuring of these racial and spatial disparities, and also how their configuration is reconciled through the mobilizing of criminal discourses, I will ask what role criminality plays in postcolonial relations more broadly.

Jovan Scott Lewis is an Assistant Professor of Geography and African-American Studies as the University of California, Berkeley. He received his PhD in Anthropology from the London School of Economics. Through his research, Jovan thinks about the interrelation between blackness and socio-economic conditions. His current book project focuses on the Jamaican lottery scam and its use as a reparative practice.