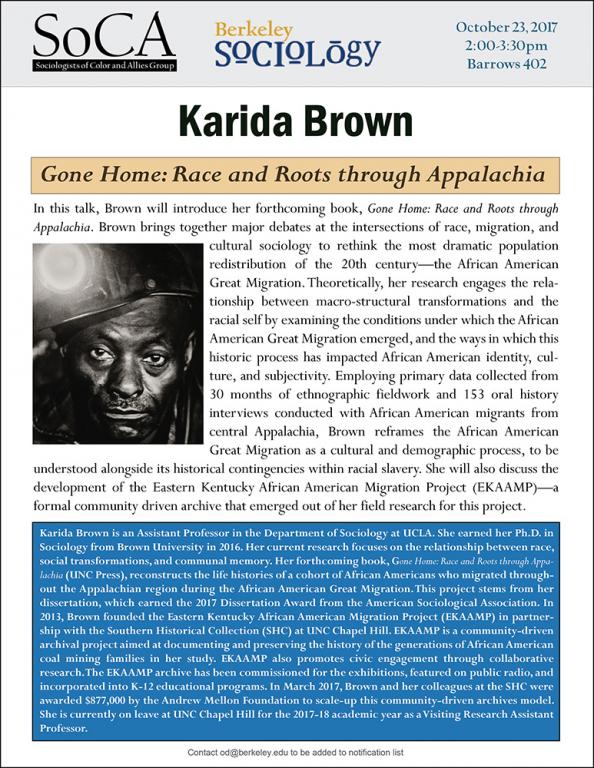 Karida Brownis an Assistant Professor in the Department of Sociology at UCLA. She earned her Ph.D. in Sociology from Brown University in 2016. Her current research focuses on the relationship between race, social transformations, and communal memory. Her forthcoming book, “Gone Home: Race and Roots through Appalachia” (UNC Press), reconstructs the life histories of a cohort of African Americans who migrated throughout the Appalachian region during the African American Great Migration. This project stems from her dissertation, which earned the 2017 Dissertation Award from the American Sociological Association. In 2013, Brown founded the Eastern Kentucky African American Migration Project (EKAAMP)in partnership with the Southern Historical Collection(SHC) at UNC Chapel Hill. EKAAMP is a community-driven archival project aimed at documenting and preserving the history of the generations of African American coal mining families in her study. EKAAMP also promotes civic engagement through collaborative research. The EKAAMP archive has been commissioned for the exhibitions, featured on public radio, and incorporated into K-12 educational programs. In March 2017, Brown and her colleagues at the SHC were awarded $877,000 by the Andrew Mellon Foundation to scale-up this community-driven archives model. She is currently on leave at UNC Chapel Hill for the 2017-18 academic year as a Visiting Research Assistant Professor.