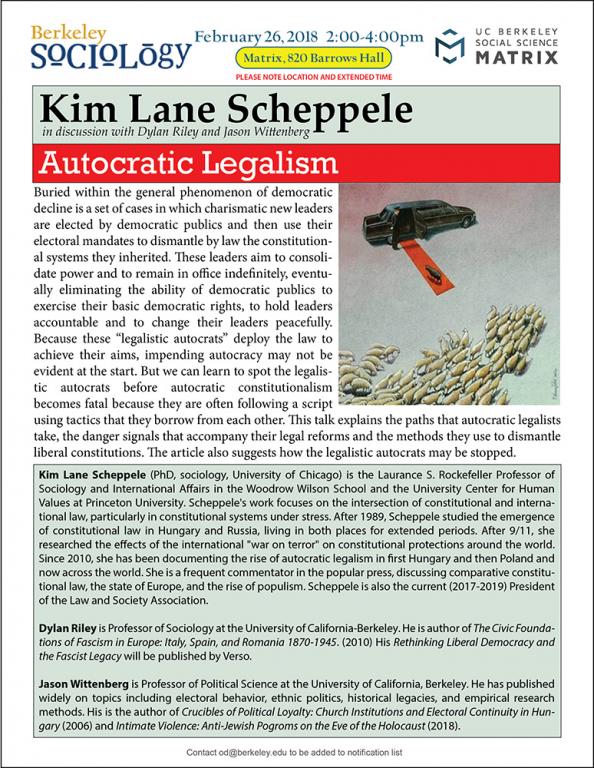 Co-sponsored by the Social Science Matrix

(with discussions by Dylan Riley and Jason Wittenberg)

Buried within the general phenomenon of democratic decline is a set of cases in which charismatic new leaders are elected by democratic publics and then use their electoral mandates to dismantle by law the constitutional systems they inherited. These leaders aim to consolidate power and to remain in office indefinitely, eventually eliminating the ability of democratic publics to exercise their basic democratic rights, to hold leaders accountable and to change their leaders peacefully. Because these “legalistic autocrats” deploy the law to achieve their aims, impending autocracy may not be evident at the start. But we can learn to spot the legalistic autocrats before autocratic constitutionalism becomes fatal because they are often following a script using tactics that they borrow from each other. This article explains the paths that autocratic legalists take, the danger signals that accompany their legal reforms and the methods they use to dismantle liberal constitutions. The article also suggests how the legalistic autocrats may be stopped.

Kim Lane Scheppele (PhD, sociology, University of Chicago) is the Laurance S. Rockefeller Professor of Sociology and International Affairs in the Woodrow Wilson School and the University Center for Human Values at Princeton University. Scheppele's work focuses on the intersection of constitutional and international law, particularly in constitutional systems under stress. After 1989, Scheppele studied the emergence of constitutional law in Hungary and Russia, living in both places for extended periods. After 9/11, she researched the effects of the international "war on terror" on constitutional protections around the world. Since 2010, she has been documenting the rise of autocratic legalism in first Hungary and then Poland and now across the world. She is a frequent commentator in the popular press, discussing comparative constitutional law, the state of Europe, and the rise of populism. Scheppele is also the current (2017-2019) President of the Law and Society Association.

Dylan Riley is Professor of Sociology at the University of California-Berkeley. He is author of The Civic Foundations of Fascism in Europe: Italy, Spain, and Romania 1870-1945. (2010) His Rethinking Liberal Democracy and the Fascist Legacy will be published by Verso.

Jason Wittenberg is Professor of Political Science at the University of California, Berkeley. He has published widely on topics including electoral behavior, ethnic politics, historical legacies, and empirical research methods. His is the author of Crucibles of Political Loyalty: Church Institutions and Electoral Continuity in Hungary (2006) and Intimate Violence: Anti-Jewish Pogroms on the Eve of the Holocaust (2018).