Manuel Castells: "Networks of Outrage and Hope: Social Movements in the Internet Age." 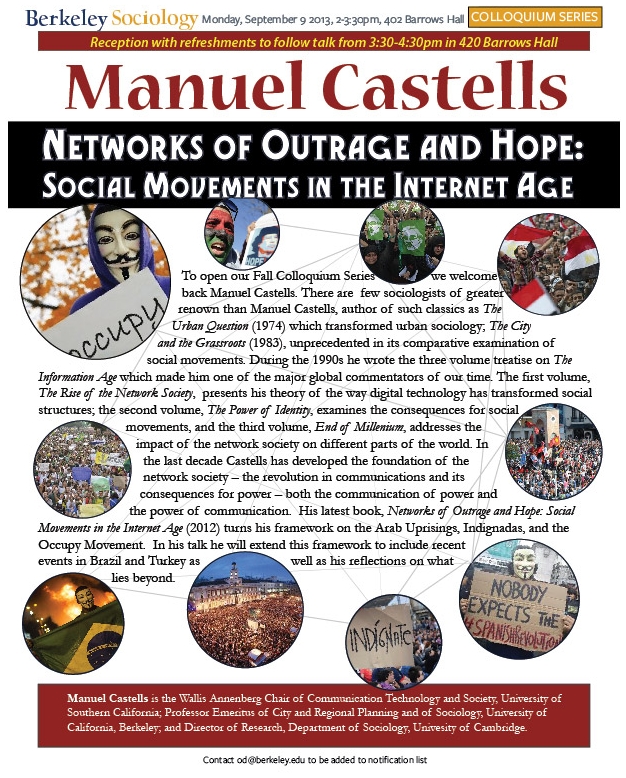 NETWORKS OF OUTRAGE AND HOPE: SOCIAL MOVEMENTS IN THE INTERNET AGE

To open our Fall Colloquium Series we welcome back Manuel Castells. There are few sociologists of greater renown that Manuel Castells, author of such classics as The Urban Question (1974) which transformed urban sociology; The City and the Grassroots (1983), unprecedented in its comparative examination of social movements.  During the 1990s he wrote the three volume treatise on The Information Ag which made him one of the major global commentators of our time.The first volume, The Rise of the Network Society, presents his theory of the way digital technology has transformed social structures; the second volume, The Power of Identity, examines the consequences for social movements, and the third volume, End of Millenium, addresses the impact of the network society on different parts of the world. In the last decade Castells has developed the foundation of the network society – the revolution in communications and its consequences for power – both the communication of power and the power of communication.  His latest book, Networks of Outrage and Hope: Social Movements in the Internet Age (2012) turns his framework on the Arab Uprisings, Indignadas, and the Occupy Movement.  In his talk he will extend this framework to include recent events in Brazil and Turkey as well as his reflections on what lies beyond.