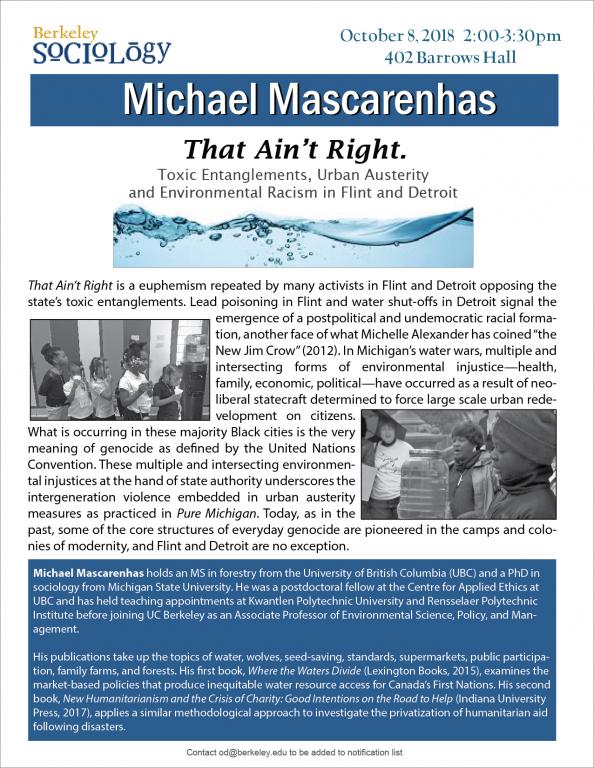 That Ain’t Rightis a euphemism repeated by many activists in Flint and Detroit opposing the state’s toxic entanglements. Lead poisoning in Flint and water shut-offs in Detroit signal the emergence of a postpolitical and undemocratic racial formation, another face of what Michelle Alexander has coined “the New Jim Crow” (2012). In Michigan’s water wars, multiple and intersecting forms of environmental injustice—health, family, economic, political—have occurred as a result of neoliberal statecraft determined to force large scale urban redevelopment on citizens. What is occurring in these majority Black cities is the very meaning of genocide as defined by the United Nations Convention. These multiple and intersecting environmental injustices at the hand of state authority underscores the intergeneration violence embedded in urban austerity measures as practiced in Pure Michigan. Today, as in the past, some of the core structures of everyday genocide are pioneered in the camps and colonies of modernity, and Flint and Detroit are no exception.

Michael Mascarenhas holds an MS in forestry from the University of British Columbia (UBC) and a PhD in sociology from Michigan State University. He was a postdoctoral fellow at the Centre for Applied Ethics at UBC and has held teaching appointments at Kwantlen Polytechnic University and Rensselaer Polytechnic Institute before joining UC Berkeley as an Associate Professor of Environmental Science, Policy, and Management.