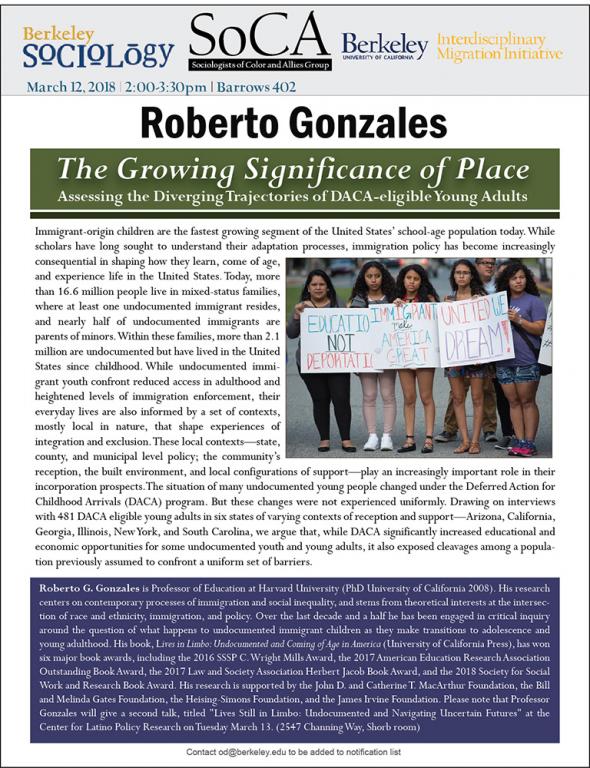 The Growing Significance of Place: Assessing the Diverging Trajectories of DACA-eligible Young Adults Across Diverse Settings

Immigrant-origin children are the fastest growing segment of the United States’ school-age population today. While scholars have long sought to understand their adaptation processes, immigration policy has become increasingly consequential in shaping how they learn, come of age, and experience life in the United States. Today, more than 16.6 million people live in mixed-status families, where at least one undocumented immigrant resides, and nearly half of undocumented immigrants are parents of minors. Within these families, more than 2.1 million are undocumented but have lived in the United States since childhood. While undocumented immigrant youth confront reduced access in adulthood and heightened levels of immigration enforcement, their everyday lives are also informed by a set of contexts, mostly local in nature, that shape experiences of integration and exclusion. These local contexts—state, county, and municipal level policy; the community’s reception, the built environment, and local configurations of support—play an increasingly important role in their incorporation prospects.The situation of many undocumented young people changed under the Deferred Action for Childhood Arrivals (DACA) program. But these changes were not experienced uniformly. Drawing on interviews with 481 DACA eligible young adults in six states of varying contexts of reception and support—Arizona, California, Georgia, Illinois, New York, and South Carolina, we argue that, while DACA significantly increased educational and economic opportunities for some undocumented youth and young adults, it also exposed cleavages among a population previously assumed to confront a uniform set of barriers.

Roberto G. Gonzales is Professor of Education at Harvard University (PhD University of California 2008). His research centers on contemporary processes of immigration and social inequality, and stems from theoretical interests at the intersection of race and ethnicity, immigration, and policy. Over the last decade and a half he has been engaged in critical inquiry around the question of what happens to undocumented immigrant children as they make transitions to adolescence and young adulthood. His book, Lives in Limbo: Undocumented and Coming of Age in America (University of California Press), has won six major book awards, including the 2016 SSSP C. Wright Mills Award, the 2017 American Education Research Association Outstanding Book Award, the 2017 Law and Society Association Herbert Jacob Book Award, and the 2018 Society for Social Work and Research Book Award. His research is supported by the John D. and Catherine T. MacArthur Foundation, the Bill and Melinda Gates Foundation, the Heising-Simons Foundation, and the James Irvine Foundation. Please note that Professor Gonzales will give a second talk, titled "Lives Still in Limbo: Undocumented and Navigating Uncertain Futures" at the Center for Latino Policy Research on Tuesday March 13. (2547 Channing Way, Shorb room)