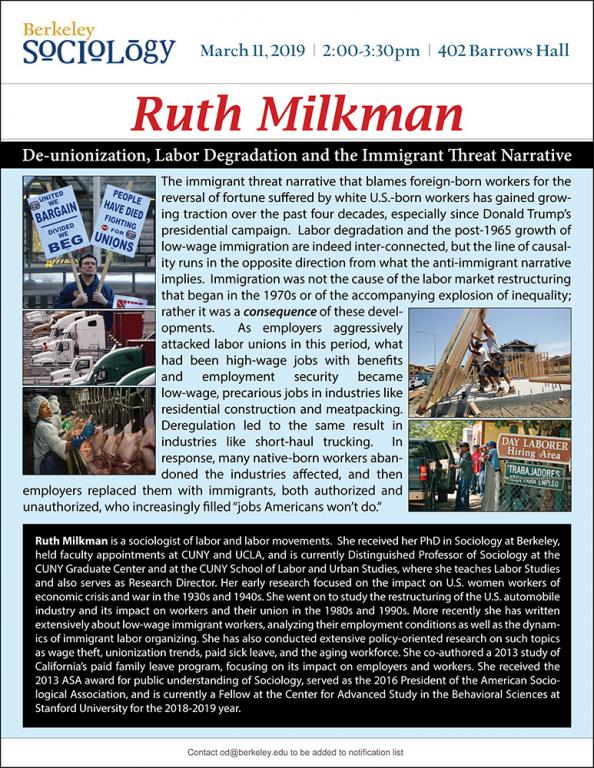 The immigrant threat narrative that blames foreign-born workers for the reversal of fortune suffered by white U.S.-born workers has gained growing traction over the past four decades, especially since Donald Trump’s presidential campaign.  Labor degradation and the post-1965 growth of low-wage immigration are indeed inter-connected, but the line of causality runs in the opposite direction from what the anti-immigrant narrative implies.  Immigration was not the cause of the labor market restructuring that began in the 1970s or of the accompanying explosion of inequality; rather it was a consequence of these developments.  As employers aggressively attacked labor unions in this period, what had been high-wage jobs with benefits and employment security became low-wage, precarious jobs in industries like residential construction and meatpacking.  Deregulation led to the same result in industries like short-haul trucking.  In response, many native-born workers abandoned the industries affected, and then employers replaced them with immigrants, both authorized and unauthorized, who increasingly filled “jobs Americans won’t do.”

Ruth Milkman is a sociologist of labor and labor movements.  She received her PhD in Sociology at Berkeley, held faculty appointments at CUNY and UCLA, and is currently Distinguished Professor of Sociology at the CUNY Graduate Center and at the CUNY School of Labor and Urban Studies, where she teaches Labor Studies and also serves as Research Director. Her early research focused on the impact on U.S. women workers of economic crisis and war in the 1930s and 1940s. She went on to study the restructuring of the U.S. automobile industry and its impact on workers and their union in the 1980s and 1990s. More recently she has written extensively about low-wage immigrant workers, analyzing their employment conditions as well as the dynamics of immigrant labor organizing. She has also conducted extensive policy-oriented research on such topics as wage theft, unionization trends, paid sick leave, and the aging workforce. She co-authored a 2013 study of California’s paid family leave program, focusing on its impact on employers and workers. She received the 2013 ASA award for public understanding of Sociology, served as the 2016 President of the American Sociological Association, and is currently a Fellow at the Center for Advanced Study in the Behavioral Sciences at Stanford University for the 2018-2019 year.