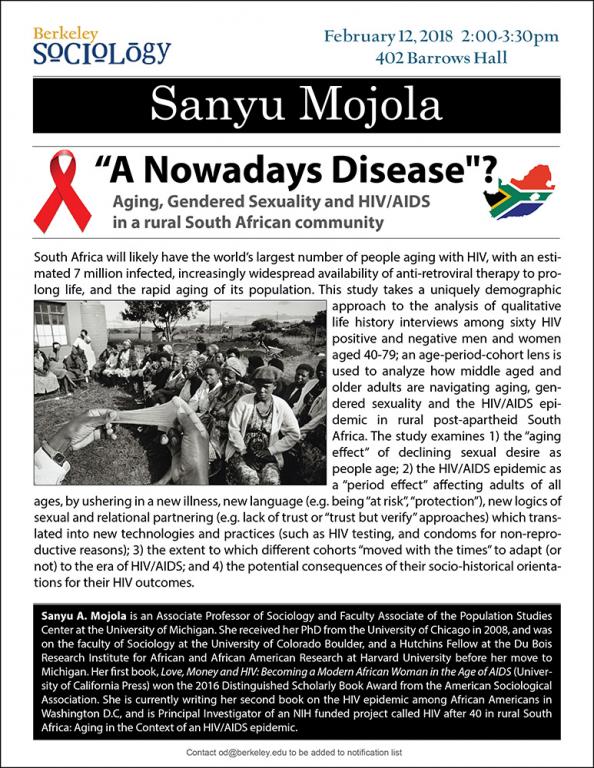 South Africa will likely have the world’s largest number of people aging with HIV, with an estimated 7 million infected, increasingly widespread availability of anti-retroviral therapy to prolong life, and the rapid aging of its population. This study takes a uniquely demographic approach to the analysis of qualitative life history interviews among sixty HIV positive and negative men and women aged 40-79; an age-period-cohort lens is used to analyze how middle aged and older adults are navigating aging, gendered sexuality and the HIV/AIDS epidemic in rural post-apartheid South Africa. The study examines 1) the “aging effect” of declining sexual desire as people age; 2) the HIV/AIDS epidemic as a “period effect” affecting adults of all ages, by ushering in a new illness, new language (e.g. being “at risk”, “protection”), new logics of sexual and relational partnering (e.g. lack of trust or “trust but verify” approaches) which translated into new technologies and practices (such as HIV testing, and condoms for non-reproductive reasons); 3) the extent to which different cohorts “moved with the times” to adapt (or not) to the era of HIV/AIDS; and 4) the potential consequences of their socio-historical orientations for their HIV outcomes.

Sanyu A. Mojolais an Associate Professor of Sociology and Faculty Associate of the Population Studies Center at the University of Michigan. She received her PhD from the University of Chicago in 2008, and was on the faculty of Sociology at the University of Colorado Boulder, and a Hutchins Fellow at the Du Bois Research Institute for African and African American Research at Harvard University before her move to Michigan. Her first book, Love, Money and HIV: Becoming a Modern African Woman in the Age of AIDS (University of California Press) won the 2016 Distinguished Scholarly Book Award from the American Sociological Association. She is currently writing her second book on the HIV epidemic among African Americans in Washington D.C, and is Principal Investigator of an NIH funded project called HIV after 40 in rural South Africa: Aging in the Context of an HIV/AIDS epidemic.