Yan Long. Between Blood and Sex: The Contradictory Impact of Transnational AIDS Institutions on State Repression in China, 1989-2013. 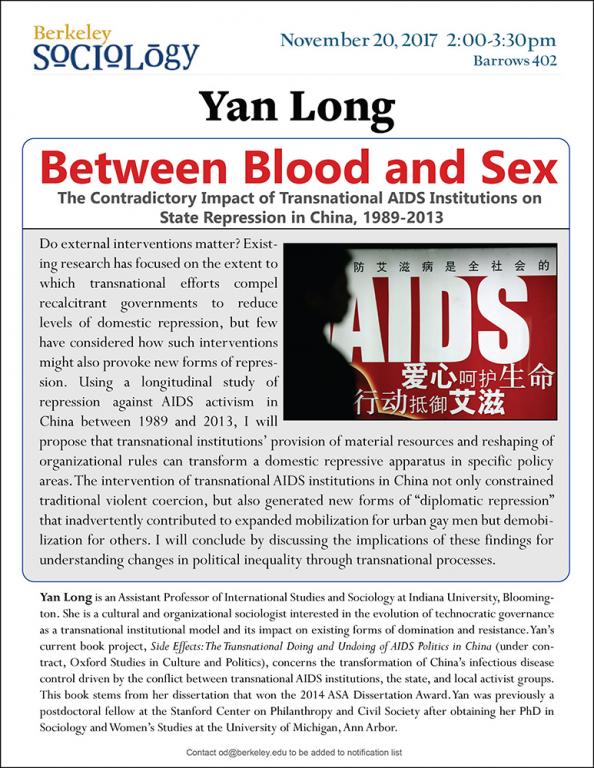 Between Blood and Sex: The Contradictory Impact of Transnational AIDS Institutions on State Repression in China, 1989-2013

Do external interventions matter? Existing research has focused on the extent to which transnational efforts compel recalcitrant governments to reduce levels of domestic repression, but few have considered how such interventions might also provoke new forms of repression. Using a longitudinal study of repression against AIDS activism in China between 1989 and 2013, I will propose that transnational institutions’ provision of material resources and reshaping of organizational rules can transform a domestic repressive apparatus in specific policy areas. The intervention of transnational AIDS institutions in China not only constrained traditional violent coercion, but also generated new forms of “diplomatic repression” that inadvertently contributed to expanded mobilization for urban gay men but demobilization for others. I will conclude by discussing the implications of these findings for understanding changes in political inequality through transnational processes.

Yan Long is an Assistant Professor of International Studies and Sociology at Indiana University, Bloomington. She is a cultural and organizational sociologist interested in the evolution of technocratic governance as a transnational institutional model and its impact on existing forms of domination and resistance. Yan’s current book project, Side Effects: The Transnational Doing and Undoing of AIDS Politics in China (under contract, Oxford Studies in Culture and Politics), concerns the transformation of China’s infectious disease control driven by the conflict between transnational AIDS institutions, the state, and local activist groups. This book stems from her dissertation that won the 2014 ASA Dissertation Award. Yan was previously a postdoctoral fellow at the Stanford Center on Philanthropy and Civil Society after obtaining her PhD in Sociology and Women’s Studies at the University of Michigan, Ann Arbor.